Facts You Should Know About Dogs Mating Process 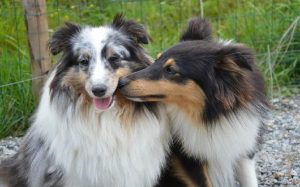 If your dog is grown up and you are thinking of its mating time, make sure to do plenty of research first. Although breeding sound easy, it is not as simple as it sounds. You should do some research before involving your male or female dog on a breeding process.

Before copulating, you should know if it is the right time for the mating. You should also ensure if both males and females are healthy and well cared for the process. In this article, you will read about the facts and things to know about its process.

1. What Age is Right for Breeding?

The right age for mating usually depends on the size of your dog. The age varies from small dogs to large dogs. The estimated ages of sexual maturity for dogs are:

Although dogs are matured at the age of one and half-year-old, it is best to wait for their second year before mating. This applies especially for female dogs as it is risky to breed during her first-year of heat. she is still mentally and physically immature during her first heat and will not be able to care for her litters.

While the male dog reaches its sexual maturity at the age of 4-6 months but this is too young for him to be used as a stud. As the male dog is immature at this age, involving it in mating can tire its system, hinder the development, injuries, and even early death. So the right age is 2 years for both male and female dogs.

2. Understand the Heat Cycle of The Female Dog

As mentioned above, the first heat of the female is not the best time for mating as they are not matured enough for breeding. The first heat lasts for seven days where bleeding occurs and swollen vulva can be seen. In this stage of females, the male will be more alert and will try to come near giving more attention to her.

However, the female will not allow the male to come even near to her and will growl at him.

During the second heat, which also lasts for seven days on average, the bleeding will be less and the female also start accepting mates. The ninth and tenth days of the heat is the best time for mating your female dog. She will not accept a mate during her last stage of heat which is around day 21.

3. How to Prepare Female Dogs for Mating?

Before mating a for the first time or any other time, there are few things to consider.

4. How to Prepare Male Dog for Mating?

There are certain things you should keep in mind before taking the step of breeding dogs. A breeder will choose two dogs carefully so the puppies from them are healthy and fit. Make sure both dogs are healthy and do not have any history of a genetic defect.

If you are breeding to see the puppy, the dogs should have breed and the appearance you are seeking. Do not breed the dogs if they have any major health problems.

Before processing the mating, make sure both male and female are ready. If the male is ready for mating, he will approach the female and starts sniffing the vulva area. And if the female is ready, she will allow the male to inspect the area without protesting.

Your presence is necessary while the dogs are mating as the dog may be having trouble mounting the female. Assets them with the positioning. Keep them together on the ninth, eleventh, and thirteenth of the heat cycle as these days have a high chance for the female dog to produce.

7. The Tie in Dogs Breeding

You might have witnessed both of the male and female dog changing position and facing the opposite direction. It is called a tie which lasts for 10-30 minutes. It is very important that your presence is there as the dogs will try to pull which might injure them.

During the tie, the majority of the male sperm is delivered into the female. As the swelling subsides, the dogs can separate.

Many successful breedings are done during the ninth, eleventh, and thirteenth of the female’s heating days. It is important to allow one good breeding each during these three days. Any more than one on each day can deplete the male sperm count, tire them both, and is not good for their health.

After mating, do not let the female mate to any other dogs. After mating the normal gestation period lasts for 63-65 days in dogs. The eggs can remain fertile for 48 days whereas the sperms are alive for several days in dogs. To know if the female dog is really pregnant, you need to visit the vet and the vet will run the test to let you know if the dog is really pregnant.

The female dog can give birth to 4 to 8 depending on the size of the puppies. Most of the caring for the puppies is done by the female dog. You should make a warm and cozy place for them and the mother will do the rest.

One thought on “Facts You Should Know About Dogs Mating Process”