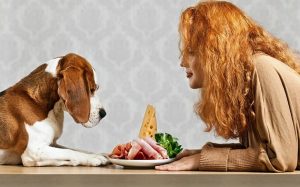 Ham is a slice of meat from the upper part of a pig’s leg that has been preserved by dry or wet curing with or without smoking. Ham contains a high amount of iron and protein which is very beneficial for the body.

If you want to feed Ham to your dog and worry if it is healthy for them or not. Don’t worry, we’ll help you with this. Here is everything that you need to know about feeding ham to your dog.

The simple answer to this question is both yes and no with no ease. While the nutritious Ham may have various benefits for the dogs, it is not better for them because of various reasons.

Most of the canine experts state that the high amount of salt present in Ham is the biggest valid reason not to give it dogs. Though salt is good for people in moderation, dogs don’t require the same quantity of sodium as we do. Therefore, it is better not to give Ham to your dog.

Why is Ham good for dogs?

Ham is a good source of protein and it is essential for dogs. However, it is the only good aspect of Ham for dogs. Otherwise, feeding Ham to dogs can be very lethal. A high amount of salt is present in ham meat which can lead the dog to be over thirsty and later suffers from “Bloat.” Thus, you should not feed Ham to dogs in any situation.

Benefits of feeding Ham to your dog

How is Ham bad for dogs?

Ham is not life-threatening for your dog but is not relatively good for them as well. First, Ham has a higher fat content in comparison to other types of meats. And a high-fat meal isn’t good for dogs.

The preservatives used in ham are loaded with nitrates and nitrites which are dangerous for dogs. Excessive intake of salt can lead the dog to vomit, diarrhea and other problems. Furthermore, it can also lead to serious diseases such as kidney damage, coma, seizures, and even death.

Experts don’t agree that Ham meat is a digestible source of protein. Therefore, you should avoid giving Ham to your dog.

How frequently should you feed Ham to your dog?

As feeding Ham to your dog has so many downsides, it becomes unnecessary to give it to your dog. But if you love your canine pal so much and don’t want to eat alone. Then you can feed them with a few bites of the meat as a rare treat. Be careful not to overfeed them which leads to various serious problems.