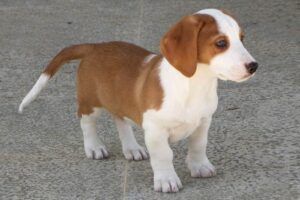 Drever is a determined breed that needs a leader that matches their energy. They are short-legged dogs bred to track and drive jungle animals like fox, deer, and others towards the hunter. In addition, they are known to be a rare breed outside of Sweden.

Moreover, Drever is highly energetic that needs long walks daily with some good play sessions and dog sports. They go through various development while growing. Here is some detailed information about what happens while they grow.

The newborn puppy is very sensitive as it can’t hear, see, walk, and is toothless from the beginning of its birth. Their eyes and ears are fully sealed and gradually open after some weeks. However, they have a smelling and touching sense that helps them to get closer to their mother. The puppies are fully taken care of by their mother for several weeks from now on.

Despite having a fur coat, the newborn can’t regulate temperature so depend on their mother and littermates for warmth. Any pup separated from their group is likely to die from hypothermia. Only feed mother’s milk as the antibodies present in it protect the babies from several diseases.

The transitional stage is where you start to see a lot of physical and behavioral changes in Drever. During the second week, they start to open their eyes and ears that allow them to see and hear for the first time. However, their vision is still blurry for more days. In addition, they learn to walk alongside their littermates.

During this stage, the pup gain doubles its birth weight and develops its body as well as mind. Furthermore, the pup begins to play with littermates and get curious about their surrounding. So, they try to escape their whelping box and explores the environment. They wag their tail and communicate with others and develop other senses as well.

Drever is a friendly and affectionate breed that makes a great companion. The socialization to you train and socialize your dog to develop skills, mental health, and boost their confidence. This phase is where Drever starts to accept you as their family member. So, take them to various places to meet new dogs, humans, and pets where they get to know the outer world.

Before exposing them to the outer world, start their training around week 8 in your house. Start with their basics and obedience training and develop their social skills. During that time, teach them to act and react while being outdoors so, it’s safe for you, the dog, and strangers. Moreover, teach them to distinguish between family members and strangers.

In this stage, Drever becomes independent and stubborn while show some personal traits. Some might show dominant behavior so, before it happens introduce yourself as their leader. They also experience teething and chewing as they grow the full set of teeth. Moreover, they easily get influenced by the pack member hence, make sure you treat them well.

By this time, they have mastered the basic training, therefore, begin their advanced training at this age. Teach other commands, skills, and dog games to make them occupied. Use positive reinforcement during the training sessions and avoid using harsh words and physical punishment.

When Drever reaches 6 months old, they lose their puppy face and are now an adult. They have gotten stronger by developing physically and mentally but still, the growing process doesn’t end here.

While growing, Drever shows more interest in females being sexually active meanwhile, female also feels the same. They both are attracted to each other during this time. However, breeding is not recommended as it affects their health. As they reach around 18 months, you can breed them as it’s safe for them then.

Vaccination Cost for the Drever