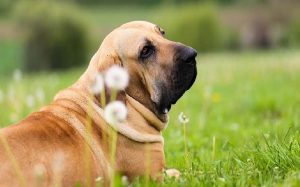 Fila Brasileiro is a big dog developed in Brazil as a hunting dog that used to hunt by tracking through the scent. It is also known as Brazilian Mastiff and is very popular among the people of Brazil. It is used for both hunting and guarding and also has been used in the military.

The Fila Brasileiro needs a strong pack leader who can keep up with their energy level. Therefore, they are not for an inexperienced dog owner and needs an experienced leader who knows their temperament. They are also not suitable in an apartment and need a big space to roam around doing their activities.

Fila Brasileiro is a loving, docile, affectionate dog breed that is very protective of its people. Although it is a gentle and loving dog, one should know that it is not the best choice for every family. As a guard dog, it is known to be aggressive and can be a threat to a family. Therefore, they are only best with a family that has can establish strong leadership on them.

Fila Brasileiro has a strong hunting instinct and can be dangerous around small animals. Therefore, they are not best suitable in a house with small pets as they can hurt them. If raised by a right hand, this breed can be an extremely loyal, and protective dog but in an inexperienced hand, it can be a huge threat.

The personality of the Fila Brasileiro is loyal, highly alert, and fearless. This dog makes a great guard dog as well as a watchdog. If there is something strange going in the area, they will first bark or growl to warn and if the person does not back off, they are very likely to bite them. Therefore, keeping them on a strong leash is very important.

Training Fila Brasileiro can be very challenging for a novice owner but it is also not recommended in the house of a novice owner. They need strong leadership from an experienced dog owner. Start training them from a very early age when they are eager to please its master. Never be harsh or forceful on them as it will only make them aggressive.

Fila Brasileiro gets along with family children very well as they are loving and gentle towards them. They are tolerant of their rough behavior as well but with outsider kids, they need to be closely supervised. Keep them on a leash whenever taking them out on a kid’s park.

Fila Brasileiro is both a hunting and guardian dog that has a very high protective instinct. Due to their protective nature towards their family and their properties, they can become aggressive if there is a threat. Otherwise, they are known as a gentle dog breed that loves their family. They are loving and very affectionate towards their people who have raised them with love instead of harsh behavior.

How Does Fila Brasileiro Behave Around Strangers?

Fila Brasileiro is wary and suspicious of strangers that do not trust them easily. They are alert if there is some unfamiliar person presence in their territory and will bark at them. If they sense danger from them, they can even go and bite them. Therefore, a proper introduction and early socialization are very necessary.