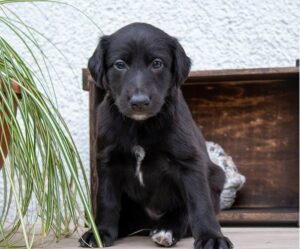 The Longhaired Whippet is a gentle, elegant, and goofy dog breed during the 1970s by Walter A. Wheeler Jr. These breeds are quite unique to the Whippet breed because of their soft and silky long hair.

They go through a lot of character development while growing into adult dogs. There are a lot of responsibilities as an owner hence, you have to observe every little detail from their birth. They can give birth to 4-8 puppies at a time.

The newly born Longhaired Whippet is really sensitive as they can’t see or hear anything for the first two weeks. Don’t try to open their eyes or ears as they will automatically open after some week. The feeding and grooming totally depend on their mother until they are able to walk. In addition, they take warmth from their mother and littermate as they can’t regulate temperature on their own. Any dog separated from their group is likely to die from hypothermia.

Newborns should be fed their mother’s milk as the colostrum in it improves their immune system, bones, and muscles. They are toothless so, don’t feed any solid foods to them. During this period, they only have smell sense which helps them to get close to their mother. They can’t walk properly so, with the help of their stomach and legs they go towards their mother. Make sure to take care of the mother as she is looking after numerous children at a time.

As the transitional week begins, the pup will gain double its original weight where its eyes and ears start to open up. However, their vision is still blurry as it will be clear after some time. They also learn their wobbly walk for the first time. Their all sense will also start functioning as their mind are developed as well. Slowly, the pup stat to grow their baby teeth which call for itching and chewing. Spend some time in chewable toys as they can chew on anything plus now you can feed solid food to them.

Through this phase, Longhaired Whippet is playful and spends more time with their littermate and mother. They also start to communicate with them via their own language. Moreover, they are able to bark and wants to learn more about the surrounding they are living in. As they continue to learn more things, make sure to feed nutritional foods it’s very important for their growth.

The socialization stage is where you introduce your pup to the outside world where they meet new canines and humans. It helps them to get comfortable around strangers without being aggressive or scared. Early socialization and training are important in their life as the behavior stays for a lifetime. Take them to a park, shop, friends, or training center for socialization where they meet more people.

The pup is gradually growing, so make sure you engage them in training when they reach 8 weeks old. Start with their basic and obedience training. Teach them some commands like ‘sit, ‘jump’, ‘go’, ‘heel’, and many more. This stage is where you should take care of your dog as their mother isn’t responsible for their care.

The juvenile stage is also known as the Ranking stage is where your pup starts to lose its puppy face. They start to look more like the adult version of themself. During this time, begin their advanced training along with other dog sports as they should have mastered the basic training by now. Longhaired Whippet can be stubborn at this age which can be frustrating however, don’t use any harsh words on physical punishment. These things can ruin them even more than anticipated.

Along with their training session, make them engage in other things like respecting your family members. In addition, teach them to arrange their own toys after playtime. They grow more biting habit from now onwards so, buy more chewable toys to avoid destruction in the house.

As the name suggests, your Longhaired Whippet hits puberty where they become physically, mentally, and sexually mature. Meanwhile, they now get the complete look of their adult face this is where your dog is no longer a puppy. Therefore, they should be watched more closely as you should give proper guidance and motivation. They now have a full set of their adult teeth by losing their baby teeth.

The matured 6 months old female, now experiences her first heat whereas, the male starts to show more interest in them. However, breeding should completely be avoided at this age as their mind aren’t fully prepared for it. In conclusion, their breeding is to be done when they are 16-18 months old.

One thought on “Longhaired Whippet Puppies”