22 Bizarre And Extraordinary Facts About Your Dog 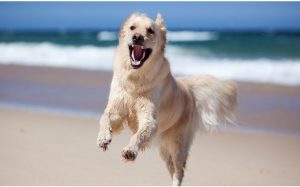 Dogs are probably the favorite pet of all among all the pet owners. But do you really know your dog?

Here are 22 interesting and somehow bizarre facts about your dog’s that you might not know.

1. Dogs can read your faces

2. Domestic dogs can breed with wolves

Since dog and wolves share similar enough DNA, they are capable of mating and breeding pups called wolf dogs, there are an estimated 300,000 wolf dogs in the United States alone.

Many dog owners said that their dog sometimes smell like popcorn or . But that smell has nothing to do with their diet. It’s actually bacteria growing on their paws.

Scientists are still confused by the fact about why smaller dogs tend to live longer. Some think larger dogs grow faster as puppies and may develop diseases and because of it small dogs live from 10 to 15 years ,medium sized dogs 10 to 13, and large dogs 8 to 12 years.

Like humans dogs have both upper and lower eyelid, but they have also got a third called the nictitating membrane. It has various functions including clearing debris and mucus and producing tears.

As we all know, dogs have a great sense of smell, but we might not know that some dogs can have a sense of smell 100,000 times more acute than our own. They have about 300 million olfactory receptors in their noses well on the other side humans only have 6 million,

As we all know dog’s are man’s best friend and there’s a lot of truth to that. Human’s and dogs have evolved together from the earliest point of dog domestication 32,000 years ago. Researchers from the University of Chicago found that several groups of genes in humans and dogs have been evolving in parallel, related to diet, digestion, neurology, disease.

8. They Can Be Kidnapped by Baboons

A viral video went showing around a Ta’if baboon kidnapping a puppy and supposedly keeping it as a ‘pet’.While baboons are known to kidnap females of their same species and even dogs, Scientists have cleared that they are not keeping them as pets.

9. Dogs only have sweat glands in their paws

Even though dogs seat out through the pads of their paws, their main form of cooling down is panting . Imagine how dog would smell after a long summer day if they had sweat glands all over the body.

Because a dog’s sense of smell is so strong,they can detect when we’re afraid or anxious. When we are anxious we perspire lightly. We can’t see or smell it,but a dog can, telling them how we are feeling.

Dogs also dream just like we do when we sleep. If you want to know it in action, just wait 20 mins after your dog goes to sleep.They will probably have their first at that point and you will see their eyes moving behind their eyelids.

12. Dog dig after peeing is not burying anything

We often see that dog’s after pooing they bury it , but actually it’s not burying , he is marking his territory using scent glands in his paws .

A dog’s bad breathe might be the result of of periodontal disease, diabetes, respiratory problems,gastrointestinal problems, or something else entirely.

Much like our own fingerprints, the lines of dog’s nose are unique and could identify individual dogs from each other.The Canadian Kennel club has been using nose prints to ID dogs since 1938.

15. Dogs can sense storms coming before they happen

Capable of sensing the barometric pressure drop and a shift in the static electricity field, dog;’s have a keen sense of when a storm is coming.Dogs can also hear sounds of thunder before we hear them.

16.A dog’s whiskers help it see in dark

A help them to get information about the height, shape, and speed of nearby objects. ability allows them to see in the dark.

17. Puppies are born both blind and deaf

18.Dog’s can smell both cancer and diabetes

Dog’s amazing sense of smell has been shown to detect cancer and diabetes. During multiple studies , dogs have been intriguingly accurate in detecting cancer in breathe and urine samples. They’ve also been enable to detect low blood sugar, there are even service dogs called “Diabetic alert Dogs” that can warm an owner when their blood sugar is reaching dangerous levels .

According to Live science, based on a language development test, dogs have the intelligence of a two year old child.Most dogs can learn up to 165 words, similar to a two year old kid.

In 2008, during a study the National Academy of Sciences found that when a dog saw another dog get a treat for the same trick they’d been performing the unrewarded dog becomes agitated, scratching themselves and avoiding the gaze of the rewarded dog.

21. Dogs have their own language

A dog’s tail wagging has its own language. If your dog excitedly wags his tail, you might may think that he’s happy to see you,right? Not necessarily. According to Discovery.com,dogs wag their tails to the right side when they’re happy and to the left when they’re frightened. Wagging his tail low means they are insecure and rapid tail wagging accompanied by tense muscles or dilated pupils can signal aggression.

In 2003, several lamp posts in Croatia collapsed. Investigations concluded that dogs urine corroded their base.