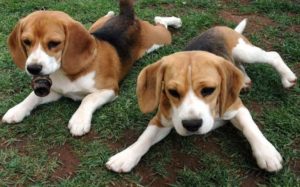 A puppy before reaching the adult stage goes through a lot of development stages. The American Coonhound in its developing stage is something you should not miss.

To know whether your puppy is growing healthy or not, you should keep a close eye to your puppy behavior growth. Excited for your new puppy? Why wouldn’t you be! So, here are some information about the stages of development your American Coonhound passes with.

When your American Coonhound is born you can notice that your puppy spends its 90 percent of time sleeping. It is a full development stage. The puppies are fully dependent on milk and on their littermates to regulate their body temperature.

The mother’s milk helps them to fight against the disease as it contains antibiotics in it. When the American Coonhounds are born they are completely blind and deaf. However, they can sense their and mother.

Through this period, American Coonhound are fully dependent on their mother. This is the fully development stage. During this period they would be able to taste and move around with the help of the front legs.

The eyes and ears will start opening between 10-14 days.

During the transitional stage from 2-4 weeks, the American Coonhound puppy’s eyes and ears are open fully and will start standing and walking. They play with their litter mates, wag their tails and teething starts during the end of the stage. The puppy starts to show interest semi-solid foods.

This is the most important stage for your puppy as well the owner and other dogs. By the 5th weeks the puppies are aware of the surrounding.

By week seven, you can start house training your American Coonhounds. But the right time for formal training is from 9-12 weeks of age.

Ranking period is often known as the “elementary school age”. Just like human babies, puppies are also influenced by their litter mates and play mates. By this stage, your American Coonhound will be able to understand between submission and dominance.

The teeth will be fully grown in till 6 months and they can switch their foods to adult foods. Chewing is excessive during this stage. Your American Coonhound will experience another fear stage at four months, so be prepared with the positive reinforcements.

American English Coonhounds now understands that he has a pack of both dogs and human and are fully influenced by the group. You can notice aggression and plenty of energy.

Your that are driven by hormonal influences begin to arrive around 6 months of age which leads to physical and sexual maturity.

It is the right time to send them to advance obedience classes since they tend to acquire alpha dominance in them during this period.

To wrap up, a well trained and well raised are always a fantastic addition in the family.