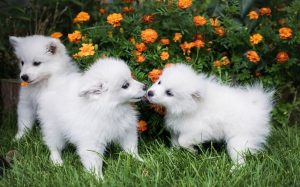 American Eskimo is a medium-sized dog that was bred as a family companion. Therefore, they have a very sweet, loving, and friendly nature. It is quite a popular dog breed around the world as they do not need an experienced family as an owner. They are adaptable dogs which makes them a common and popular companion.

An American Eskimo can give birth up to 5 puppies at a time. Here are the developmental stages of the puppies from birth to adulthood. From this article, you can learn about their physical and mental development at different ages.

The newborn American Eskimo is a cute little white puppy that looks more like a guinea pig. Their eyes are sealed and they can neither hear nor walk for about two weeks. They, however, can sense their mother and go pile around her for milk and warmth.

For a week, the puppies are not able to do anything by themselves, even cannot excrete by themselves. The mother helps to stimulate their stomach by licking which makes them defecate. They cannot eat any solid food as they are toothless and completely depends on their mother’s milk.

The stage between birth to the second week of the birth is known as the neonatal stage for the American Eskimo puppy. They need to sleep most of the time for two weeks and only wake for food. They should only be given their mother’s milk as it contains colostrum which is very rich in antibodies that fight against the possible disease.

In 10-12 days, they start to open their eyes but are still unable to see clearly. The mother helps them to eat and clean them by licking. There is no need to bathe them as the bitch will do that by licking. Their body height and weight get doubled in the second week.

This stage is one of the very important periods in the American Eskimo puppy life. They start to see more clearly and they begin to get familiar with the things and sounds around them. They become able to stand for the first time and the interaction with other littermates increases with wagging tails and growling on another.

The puppies begin to develop teeth and start sampling food from their mother bowl. They become able to potty themselves and can generate body temperature on their own. In the fourth week, the American Eskimo puppies become active on their feet and run around playing with their littermates and mother.

Since the American Eskimo was bred to be a companion dog, it is naturally a sociable dog. However, it is necessary to socialize them and guide them so they can learn about people and know who they can be friends with and who they need to be aware of. Take them to a park and introduce them to a variety of people and other canine friends. It is necessary to keep them on a leash so they do not run off as they are a lot naughty at this age.

It is a stage where the puppies are hard to handle as they are curious, stubborn, and very enthusiastic. Besides being mischevious, this is the perfect time to train them. Start training you American Eskimo some basic obedience from the beginning of the stage when they are energetic and very eager to please. This is the period when the puppies learn the result of the behavior and analyze what is best for certain incidents.

At six months, the puppy reaches sexual maturity where the female experience her first heat. It is time to observe her and take good care of her. Although she becomes sexually mature, she is not fully grown and can affect her health.

This is the stage where the American Eskimo puppy grows and becomes a beautiful, fluffy adult. Even though they are fully grown and sexually mature, they still are emotionally immature. They get their all 42 sets of teeth. This is the time where they need agility training, more socialization, and other activities. They also should be given a complete balanced diet to keep them healthy.