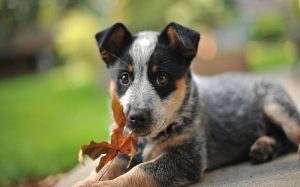 Australian Cattle Dog is a medium-sized working dog that was bred in Australia for herding and looking after cattle. It is a very hard-working and energetic dog breed that is only suitable for an active family who has a farm.

The Australian Cattle Dog can have 5-7 puppies at a time. The puppies need good caring, so here are the methods of caring for the puppies and their behavior in different months.

Like any other newborn puppies, the Australian Cattle dog puppies are also completely deaf, blind, and toothless. They are helpless little puppies who cannot even defecate by themselves. The mother helps them to pee and defecate by stimulating to poop through licking their stomachs. Since the puppies also cannot generate heat on their own, they pile up against their mother for warmth.

Australian Cattle Dog at this stage is delicate, small puppies that are dependant on their mother for everything. The mother takes care of them very gently and does not let anyone except family come near her puppies until she feels they are ready for human interaction. The puppies only feed on their mother’s milk as it contains colostrum which is rich in antibodies that helps them fight against diseases.

By 10-12 days, the eyes of the puppies start to open. However, they are not able to see clearly and have vivid visions.

The important stage of the puppy’s life is always the transitional stage. This is the time when they get to see their mother and other littermates. They hear the sound of their mother for the first time at the end of the second week. They also start forming their own vocabulary to communicate with their mother and littermates.

In this period, the puppies are able to take some steps and by four weeks, they start walking their wobbly walks.

First, they need to be trained to walk on the leash so it is not uncomfortable for them to walk. Never take them out without a leash on because they might get in a fight with other dogs and might run from you.

They also need the vaccination of distemper, adenovirus, DHPP at this time.

This is the stage where they begin to lose their puppy face and gain a little part of an adult’s looks. They should be given obedience training from the socialization stage and it should be continued adding some extra tricks and commands. They should be enrolled in agility as the Australian Cattle is a working dog that needs a good amount of physical exercise.

This is the time when they need the vaccination against rabies which should be done between 12-24 weeks. They also need the medication for heartworm as vaccination is not available for it.

In this stage, the Australian Cattle are grown to be an adult. They become strong and developed more muscles on their bodies with strong bones. They still behave like puppies which remain for a few months. This is the time when they need advance training with lots of tricks and commands. Give them reward-based training to motivate them.

Since their teeth are all out and fully developed, they can eat solid food like bones and meats. Provide them with a complete balanced diet and supplements if necessary.

Visit Doglime for more information about the dog’s puppies and their behavior.