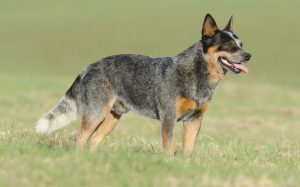 With a strong head slightly curved, The Australian Cattle Dog Breed is often known as Blue Heeler or Queensland Dog named after a state in its native Australia. They are extremely intelligent, active and sturdy dog breeds still used herding dogs.

Beside the herding works, the canine thrives into sports such as agility training, obedience training, flyball, competitions. It is very protective .

The Australian Cattle dogs were bred during the 19th century by Australian settlers to herd cattle. These breeds helped expand the Australian beef industry by herding wild cattle with nip and bites.

Yes! children are absolutely safe with the Australian Cattle Dogs. They are fabulous playmates for kids. However, they should be trained on how to approach the children since they are big and rough, might hurt and bite the kids unintentionally.

Not only the dogs, but you should teach your children too on how and when to approach a dog. Teach your child not to bother them while eating and should avoid pinching, pushing and pulling. They may get irritated and aggressive.

Temperament is affected by numerous factors such as heredity, socialization, and training of the Australian Cattle Dogs. Do not choose the puppy who is hiding in the corner or who is aggressive and beating up its littermates. Those factors too can affect the puppy when he’s grown up. Always choose a puppy who is playful and willing to be held by people.

Australian Cattle dogs are strong, independent and tend to be stubborn at times. These dogs need consistent leader otherwise they become dominant and try to rule the roost. The training should be started at an early age to develop leadership in the canine. Being bred herd dogs, these dogs are something to watch when they’re working.

This is an eye disease that involves the gradual deterioration of the retina. In the early stage of the disease, it may cause night blindness in the dog and may lose eye sight during the day when the disease progresses.

This is the inherited in the Australian Cattle Dog, but it can be tested when the puppies are young. As per the research, deafness is a color linked gene that causes the puppies to born white or the hairs in the coat with pattern.

The cost of Australian Cattle puppies is somewhere around $600-$800. An average of 5 litter are born at a time.

Australian Cattle dogs are similar to:

Lastly, despite their muscular and serious looking personality, these dog breeds are lovable and playful when trained properly.