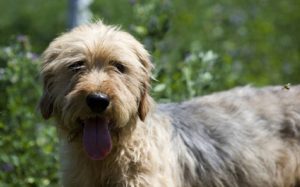 The most noticeable feature of the Barak Hound is it’s shaggy, broken hair. It has longer legs than most of the scenthound out there which makes it a distinct dog. The chest is deep and the legs are relatively thicker. The tail is thick and slightly curved and held upright.

Temperament: The temperament of the Bosnian Broken-haired Hound is courageous, lively, persistent, and alert. They are a very devoted hunter as they were bred to chase and hunt small animals. They have a high prey drive due to which they should be kept with small pets from an early age so they get along with them well.

Behavior: Bosnian Broken-haired Hound is very vocal as they were bred to ‘bay’ when they track a game. It cannot be trained out of them but you can reduce its innecessary baying by proper training.

Personality: The personality of the Bosnian Broken-haired Hound is protective, affectionate, and sometimes stubborn. This breed is not widely kept as a companion dog but it is said that they are very devoted and affectionate towards their master. They are protective and alert which makes them a great watchdog and sometimes guard dog.

Barak Hound is an intelligent dog breed due to which it makes any experienced master easy to train them. They are very eager to please their master, so train them from an early age and always use the positive method of training.

Never be harsh or forceful on them as it will only lead to their aggression or it will make them scared. Be gentle and always give them a gentle pat on the back and vocal praises as to keep them motivated.

Bosnian Broken-haired Hound is not generally kept as a family companion but they are known to be very patient and gentle with children. They love to be by their side and play with them. However, it is originally bred as a hunting dog and its energy cannot be handled by small kids and toddlers. Therefore, they do great in a house with older children.

Broken-haired Hound can face the following canine health problems during their lifetime:

Bloat: It is a condition where the belly of your dog looks like it is filled with gas. It is also called gastric dilatation which is caused due to improper diet and poor digestion. Therefore, feed your dog a properly balanced diet and avoid food that causes bloating of their stomach.

Patellar Luxation: It is a skeleton problem that is commonly seen in small dogs. It occurs when the kneecap of your dog is dislocated from its original place. Patella is located in the hind limbs of the dog, so it affects the hind legs only. In minor cases, the dog will face mild pain on the hind legs and in severe cases, it will face extreme pain making it unable to even move.

Cost: The average cost of the Bosnian Broken-haired Hound puppy is between $600-$800 USD.

Height: The average height of the Bosnian Broken-haired Hound is between 18-22 inches.

Weight: The average weight of the Bosnian Broken-haired Hound is between 35-53 pounds.