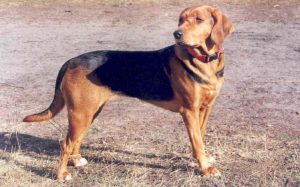 Polish Hound which is also commonly known as Ogar Polsky is a hunting dog. It is a medium built, strong, sleek dog breed with a powerful bone structure. They have large ears that are hanging by the cheek and a nose that has a keen sense of smell.

It makes a great family pet for an experienced dog owner in a house with an open space. They are not at all suitable for a novice dog owner who cannot handle them the right way and cannot meet their energy level.

Polish Hound was originated in Poland as a scenthound. It was first described in a book named ‘The beginnings of the natural history and farming of the national domestic and wild animals’ by Krzysztof Kluk in 1779. It is believed that the Polish Hound was bred by crossbreeding St Hubert Hound with the local hounds.

The FCI recognized Polish Hounds as a scenthound in 1966.

Temperament: The temperament of the Polish Hound is calm, affectionate, intelligent, and protective. They are an ideal family pet due to their loving, sweet yet protective nature. With family, they are loving and playful but around strangers, they are suspicious. They make a great watchdog that will look after your family.

Behavior: Polish Hound is known for its excellent sense of smell. Sometimes it can go far from tracking some interesting scent that its nose catches. So, to avoid getting your dog lost for a long time, keep it in a fenced yard or on a leash.

Personality: The personality of the Polish Hound is calm, gentle, courageous, and smart. They are a gentle and calm dog that gets along with their family as well as other pets in the house. They are brave and also smart dog breed that is easy to train.

Polish Hound is not a difficult dog to train as they are smart and quick at catching new commands and instruction. They get bored with the same trick repeatedly, so it is necessary to challenge them physically and mentally from time to time.

Use positive reinforcement as a method of training by rewarding them with delicious treats and lots of vocal praises. This will keep them motivated and focused on the training session.

Polish Hound gets along with children very well due to their loving and playful nature. They make great playmates for kids but due to their high energy, it might cause accidents with small kids. Therefore, they are suitable for older children than small kids. Always supervise their interaction when they are playing.

Polish Hound is prone to a few of the following possible canine health problems:

Polish Hound comes in the combination of the following colors:

Height: The average height of the Polish Hound is between 21.5-23.5 inches.

Weight: The average weight of the Polish Hound is between 55-62 pounds.