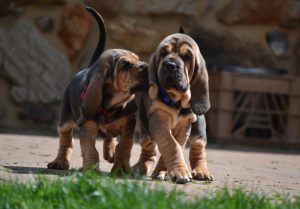 Bloodhhound are large breed with droopy eyes and floppy ears. These breed were originally bred for hunting deer. They are large logs with mild-mannered and sometimes stubborn.

If you are thinking of adding a Bloodhound puppy in your family then you need to know their behavior in every stage. Always remember, the more you keep a keen eye on your puppy’s growth, the more it will be easy for you to understand their behavior.

During the newborn stage, the mother has the most influence over the baby. The newborn Bloodhound eyes and ears would be sealed until the end of two weeks.

In this period, the Bloodhound puppies will need the help of their littermates and mother to regulate it’s body temperature. However, the important part is, if any puppy is abandoned, then you need to bottle feed the Bloodhound and keep warm for their safety.

The Bloodhound puppy will start hearing things and their eyes will be opened. Teeth start to appear and they will try to move around with their front legs. In the beginning of the third, week, the pups will start to explore the surrounding and play with it’s littermates.

This is surely the best moment to watch your pup developing. The period between two and four weeks is one of the best period you don’t want to miss. Moreover, you will now see your Bloodhound pup wagging it’s tail, barking and jumping around. The puppies will rely on their mother for milk as they cannot eat solid foods.

The socialization period clearly means, that you need to socialize your Bloodhound puppies to the surrounding. And by surrounding it means, with other dogs, new people and even other animals. You can also, take your little Bloodhounds on short walks with leash tied on them.

The puppies will start interacting properly with people around five to seven weeks of age. You need to build a strong bond between you and your Bloodhound puppies. By week seven or eight, you can now start house training your puppy, with simple commands. Furthermore, your Bloodhound pup might go through a ‘fear’ stage on eighth week. Encouraging and reinforcing can help your pup pass through the stage.

Ranking Stage also known as Juvenile period, is an elementary school age for Bloodhound puppies. In this stage, the puppies will start developing dominant and submissive attitude inside the pack. The puppy will be more confident and motivated by it’s own curiosity in the world.

Your Bloodhound puppy will now be able to able all the solid foods. They will develop the habit of chewing and teething. Moreover, since you would house train your pup before reaching the age of four months, you can now send them to advanced training classes. During these months, the Bloodhound puppy will go through another ‘fear’ stage so it’s better to get ready with positive reinforcement prior the stage.

Your Bloodhound puppies are no more puppies now. They are a grown up dog with masculine body and large size. Many puppies will start losing their puppy face by this time.

Now your dog will understand that it’s pack consists of both dogs and human. By the six months, they will start developing sexual behavior. In that case, they can be spayed or neutered. A second chewing phase will start between 7 to 9 months of age.

Bloodhound breed needs proper training as they as large breed and can often have mind of their own. However, you should send them advance obedience classes and should remind them constantly, that they are not the alpha of the house.

The average cost of a puppy vaccination is $75 – $100. These will include the vaccines which your puppy needs to get shot in a series of three.

At last, dogs are the most loyal animals on earth. It is our duty to give them a proper lifestyle when we bring them home. So, the above information might be helpful to understand your puppy’s behavior in each stage. The more you will examine their developing stage, the more you will fall in love with your new furry little Bloodhound.

One thought on “Bloodhound Puppies”