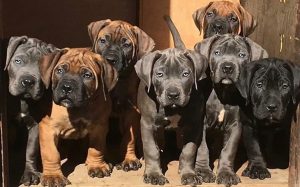 The Boerboel is a large-sized dog breed that originated in the southern part of Africa as a working farm dog. They have a loyal, bold, aggressive, and obedient temperament.

In this article, you’ll get to know about the different development stages that the Boerboel dog goes through.

On average, the Boerboel puppies are born in a litter size of 7-10. The puppies are born totally blind with sealed eyes. Moreover, their ears are also closed at the time of birth meaning they won’t also be able to hear anything.

It is very important to take care of the puppies as they are very weak and vulnerable. They cannot even generate heat themselves which is whey they stay attached to their mother and litter-mates.

As the puppies will be just developing neurologically, they will need to feed on to their mother’s milk. Their mother helps them pee and poop by licking them in their stomachs which stimulates their body and causes them to defecate. Likewise, you better leave the mother clean her puppies by licking and do not bath them during this stage.

You wouldn’t want to miss the transitional stage of your Boerboel as it is full of lovable and exciting changes. The puppies will be fully influenced by their mother and siblings. The closed eyes will gradually open and they will be able to see the world for the first time.

The sense of hearing and smell will eventually develop by the third week and they’ll get to know what the surrounding environment is like. When the puppies become 4 weeks old, they will be able to stand, wag their tails, and walk here and there a bit. They will only rely on their mother’ milk as they cannot eat other foods.

In the socialization stage, the Boerboel puppies will require chances to socialize with the surrounding environment, new people, and other dogs and pets. Expose your pup to the outer world by taking them on walks on the leash. The puppies will be able to eat semi-solid food items.

If you want to socialize your puppy with humans, let them meet and interact with people of all ages. Expose them with kids and adults, and also men and women. When introducing with children and old people, make sure to supervise because the huge size of your Boerboel can easily knock them off.

The Boerboel puppies will develop their own kind of vocabulary in order to communicate with their mother and siblings. They will learn to play, experience inhibited bit, and their motor skills are also completed by the end of this stage.

Juvenile, also known as the Ranking stage, is considered the Elementary School Age as the Boerboel puppies will experience huge boost in confidence. To clarify, they will start to be dominant and submissive within their packs.

After entering this stage, the Boerboel puppies will have already developed all of their puppy teeth. They will be able to switch solid food items. This is when they start chewing and teething problems. Therefore, be careful of your expensive clothes and shoes.

Before your Boerboel puppy becomes 4 months old, you should’ve trained him/her all the basic home training. After that, you should gradually move on to advanced and pre-agility training. Obedience and behavioral training is a must in this stage.

They are curious to know about the environment but also develop another fear phase. Therefore, better be ready with positive reinforcement and introduce them with objects and things properly.

By the age of six months, they will experience first heat where the males are more interested in females. However, you should make sure not to involve your pooch in mating or breeding as they are still in the midst of becoming adults. If isolating your dog is not possible, it’s better to spay or neuter your female Boerboel to avoid unwanted pregnancies.

The giant-sized dog will get influenced by its pack and act accordingly. Similarly, they may also question your leadership and dominance. So, you should handle it properly with care and make them understand that they must follow you.

Visit Doglime if you also want to know the different development stages of other dog breeds.