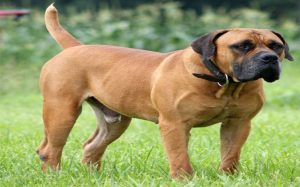 The Boerboel breed is the large, powerful and intelligent dogs that descend from the ancient Boer Dogs, Bullmastiffs, and other large working dogs.

The Boerboel is devoted to protecting the people as well as places he loves. He is an excellent watch dog as well as a perfect family companion.

Origin and History of the Boerboel Dog Breed

The Boerboel breed, also called the South African Boerboel, was originated in South Africa in the mid-1600s for the purpose of guarding the homestead. They were bred as the working farm dogs and excellent watchdogs.

The Boerboel got its name from the African word “Boer,” which means “farmer.” This refers to the white Dutch farmers that settled in South Africa and used huge, Mastiff-type dogs to protect their farms and families.

According to Petwave, when Egypt was conquered, Assyrian dogs spread to South Africa and to the rest of the world. Assyrian dogs further developed into two basic types which were the hounds and the mastiffs.

Tough farmers in South Africa developed the Boerboel breed between 1652-1900 in a hard school. The farmers were threatened by every kind of dangerous predators in the challenging climate.

The farmers didn’t have the circumstances which exactly encouraged the conservation of rare breeds of dog. They needed a brave powerful virile dog breed to protect themselves as well as their farms from the wildlife.

The Boerboel breed was developed from the best mastiff-type dogs available in South Africa and was brought here by soldiers, colonists and settlers from Europe as well as migrating African tribes.

Yes, they are indeed very good companions for your kids if they know each other well. For this, early socialization is very necessary.

Behavior, Temperament and Personality of the Boerboel Breed

Boerboel breed is affectionate, playful, loyal, loving and confident with their families. It is a dominant breed and they have a strong watch and guard dog instincts and are fearless and extremely protective of their loved ones.

Boerboel dogs make excellent guard and watchdogs. Nothing protects a home from intruders like an angry, aggressive 200-pound dog that mistrusts strangers and has an alpha attitude.

The Boerboel dog is relatively reliable, obedient and highly intelligent breed. He is a unique combination of roughness and gentleness that makes him a good family pet if he is raised and treated properly.

Trainability of the Boerboel Breed

Boerboel dogs are intelligent and have natural pack instincts. Puppies are easy to train, as long as their pack instincts are taken into control and training is started before adolescence sets in.

The Boerboel dog ed dominant but kind owners that are willing to give them clear commands .

The Boerboel puppies should be made familiar to the surrounding as soon as possible to make them socialize for the breed.

Facts About the Boerboel Breed

Here are some facts about the Boerboel breed that you would know:

The Boerboel breed suffers through a series of health issues and diseases in their lifetime. Some of them are as follows:

Color Patterns of the Boerboel Breed

The Boerboel dogs are found in eight different colors. They are mentioned as follows:

The Boerboel puppies are fairly easy to train if the training is started by the moment you bring them home. If you make them socialize to the outer world, you won’t face any problems rearing him.

Size of the Boerboel Puppies

The puppies start as small silly beings and weigh to 50 to 65 pounds in their juvenile stage which is heavier than most of the full-grown breeds.

Price of the Boerboel Puppies

Which Dogs are they similar to?

Some dog breeds that are quite similar to the Boerboel breed are as follows: