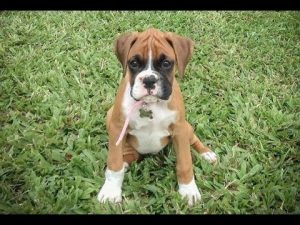 Boxer puppies are just adorable. Having a new boxer puppy at home is just overwhelming. But have you ever thought about the responsibilities you will have to handle and take care of?

Besides, its not only about responsibility and taking care of your Boxer puppies, it about understanding their behavior in each development stages. Well, this article will help you in every way about Boxer puppies.

Newborn Boxer puppies will spend their day by sleeping 90% of the time. The newborn puppies will only move to regulate their body temperature or when they are hungry.

Newborn Boxers will not be able to hear, see or sense anything. Their eyes and ears will be closed until the end of week two. They will be unable to sense the human stimuli until they can see or hear.

Neonatal stage is a very delicate stage for the puppies. Therefore, keep a close eye on Boxer puppies, whether they have been abandoned by its mother or littermates. If any puppy is abandoned, bottle feed them and keep them in a warm place. Or, it will die.

The transitional stage is a serious development stage. You can see your Boxer puppies opening their eyes and trying to wag their tails for the first time. Your Boxer puppies will also start walking a bit between two to three weeks.

Baby Boxer will now want to explore the surroundings and will run around littermates jumping and growling. In addition, their teeth will start appearing and they want to taste food from their mother’s bowl.

Boxer puppies will start playing and running around the house with their littermates. They will be mischievous and may want your attention too. From the third and fourth weeks of their development, Boxer puppies will control their bowel movement as they move away from their whelping box.

Many puppies will start having worms at this stage. And the mother Boxer may lose interest in cleaning her puppies excretion, having said that, you will have to take a step forward to clean the surroundings.

This is the high time you socialize your puppy and give some basic training. You should start potty training and basic commands like, ‘sit’, ‘stay’ and ‘come’ followed by a gesture.

By the eighth week, Boxer puppies will start being familiar with the surroundings and the people in the house as well. You should socialize the puppy with other animals as well as people around your neighborhood. A well-socialized puppy always defines a well-behaved dog.

From the starting of three months, your Boxer puppies will start feeling the independence and confidence in them. You should keep the training consistent as this is the very fragile time your Boxer puppy needs to learn. Furthermore, when they reach the age of four months old, you can send them to advance training classes.

Now your Boxer puppies are not puppies anymore, adolescence has now hit them. Your Boxer will now lose their puppy face completely and are now adult versions of themselves.

Boxers will now lose their baby teeth and their second teething phase is likely to get started. During these months, your Boxers will grow stronger and more energetic. You should increase the training session according to their diet.

The medium-sized breed tends to grow fast physically but their mind will still be a puppy until the end of the month. You should take care of their diet as well as their behavior. A well-trained puppy only grows as a well-behaved dog.

Vaccines usually costs between $75 – $100. However, it depends upon the area as well as veterinarian to veterinarian.

What Diseases Do Vaccines Prevent?

One thought on “Boxer Puppies”