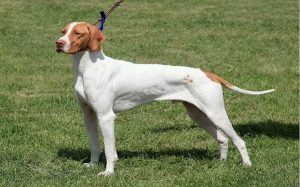 Braque Saint-Germain is a medium-sized dog breed with a strong and muscular breed. It is a gun dog with heavy bones, muscular body, long hanging ears. Their nose is pink and has wide nostrils and the eyes are big and golden which gives them a calm and relaxed expression.

IT was bred as a gun dog that used to flush, point, and retrieve a variety of games. Today, they are not only used as a gun dog but are also kept as a family companion. They do best if they are kept in a house with a yard where they can perform their regular physical activities.

In 1913, the French Breed Club was established and the FCI recognized Braque Saint-Germain internationally as pointing dogs. The United Kennel Club recognized this breed as a member of Gun Dogs in 2006.

Temperament: The temperament of the Braque Saint-Germain is devoted, gentle, loving, and very active. They are extremely devoted to their people and want to spend time with them. They are loving dogs and are also active so they are not best suited in a house with inactive people or owners that are busy outdoor.

Behavior: Braque Saint-Germain does best when they are with their people, helping them in their work or playing with them. They thrive on the company of its people and if they do not get enough attention, they tend to get separation anxiety. They can be destructive, anxious, and depressed, so do not leave them alone for a long period of time.

Personality: The personality of the Braque Saint-Germain is friendly, highly energetic, and sociable. They get along with people at home as well as strangers. Although they are a sociable dog breed, they tend to bark at unfamiliar people and warn their owners. They are not likely to get aggressive and get along with other people after a proper introduction.

Braque Saint-Germain is a smart, intelligent dog breed that is very eager to please their owner. Therefore, they are easy to train as they are focused and obedient. They need a gentle trainer that can train them using positive reinforcement.

Never be harsh or forceful on them as it might make them scared and they will not be able to focus on the training session. Do not punish them even if they make mistakes. Reward them with delicious treats and lots of vocal praises as they complete a certain task.

Yes, Braque Saint-Germain gets along with children very well and are loving and gentle towards them. They are playful with them are also tolerant of their harsh behavior. Although elderly supervision is always necessary when they both are interacting to avoid any kind of accidents.

Braque Saint-Germain can face a few of the canine health problems during their lifetime.

Braque Saint-Germain comes in the combination of dull white color with orange markings.

Height: The average height of the Braque Saint-Germain is between 20-26 inches.

Weight: The average weight of the Braque Saint-Germain is between 40-55 pounds.