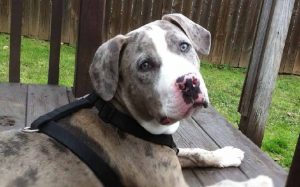 The appearance of the Catahoula Bulldog is a strong, muscular build that resembles the American Bulldog physiques. They usually carry an intimidating facial expression. With an active and loving family, they make an excellent companion.

Temperament of the Catahoula Bulldog

They make an excellent family pet due to their playful, loving, and protective nature. They also make a great guard dog as well as watchdogs that will warn their owner if there is anything unusual.

Catahoula Bulldog forms a strong bond with its family and more strong bond to one specific person of the family that it sees as its leader. They need a regular good amount of physical exercise. If they are not satisfied with the physical activities, they tend to get destructive and even aggressive.

Personality of the Catahoula Bulldog

The personality of the Catahoula Bulldog is protective, alert, loving, and friendly. They are a very alert dog that is protective of its people and will not back off if there is any threat coming towards their family. With family, they are very gentle and quiet that love cuddling with them and be by their side.

Catahoula Bulldog is not a tough dog to train as long as you are an experienced dog owner. They need a firm and consistent leadership which should be established at an early age.

Use a positive method of training and do not repeat the same training as they might get bored and will not focus. Start from basic obedience training and slowly move to agility.

Catahoula Bulldog gets along with children very well as they are gentle and loving with family kids if they are raised together from small age. They make excellent playmates for children due to their playful and tolerant nature.

Although Catahoula Bulldog can do great with kids, it is always necessary to supervise their interaction to avoid any harsh behavior from either party.

Catahoula Bulldog can get aggressive in front of the same-sex dogs and when their family is being threatened. They are gentle with family and are not at all aggressive with people. The kind of environment they are raised also determines their aggressive behavior.

How Does Catahoula Bulldog Behave Around Stranger?

Catahoula Bulldog is wary of strangers but is not shy. They are suspicious of them and if they see some unfamiliar person approaching, they are likely to bark to warn their presence of someone’s presence. Expose them to a variety of people at an early age so that they become warm and welcoming to the guest at home.