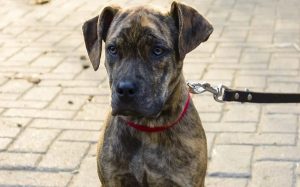 Catahoula Bulldog is a beautiful designer breed that is the mix of American Bulldog and Catahoula Leopard Dog. It is known by names like Catahoula Bulldogge, American Mastahoula and was originated in the Lake Catahoula, United States. It is believed that they were around for over a hundred years and were used as hunting and working dog on farms.

With high energy and gentle disposition, Catahoula Bulldog makes a great companion for a loving and active family. They are not suited for apartment life and needs an open place where they can perform their regular activities.

Temperament: Catahoula Bulldog has got mixed temperament from both of its parents. It is protective, brave at the same time sweet and loving natured dog that makes an excellent family companion for an active family. While working, they can be aggressive but with its people, they are very gentle.

Behavior: Catahoula Dog is a very active hybrid that needs good amount of regular physical exercise. If they are not provided with enough activities and mental stimulation, they tend to become destructive and depressed. So, involve them in household activities which they are happy to do.

Personality: The personality of the Catahoula dog is devoted, friendly, alert, and wary of strangers. While at home they are playful, gentle, and loving with its people but also protective of them. They are very likely to sound an alarm and warn their owner if there is anything unusual going on in the surrounding. This makes them great watchdogs and guard dogs.

Training Catahoula Bulldog is not a hard task to do if you provide them with the firm and consistent training. Establish strong leadership upon them and use positive reinforcement as a method of training. This will keep them motivated and they will remain focused on the training. A novice dog owner cannot train Catahoula Bulldog due to their independent nature.

Catahoula Bulldog is a child-friendly dog that gets along with children very well. They are friendly, gentle, and playful with them which makes them a great play partner. They are sweet and protective of kids and also tolerant of their harsh behavior. Despite their gentleness, it is always necessary to supervise their interaction to avoid any kind of injuries and accidents.

The Catahoula is a hybrid dog breed that can face some genetic health problems:

The Catahoula Bulldog comes in the combination of the following colors:

Height: The average height of the Catahoula Bulldog is between 24-26 inches.

Weight: The average weight of the Catahoula Bulldog is between 75-100 pounds.