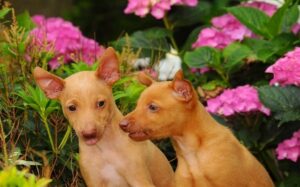 The Cirneco dell’Etna is a small-sized dog breed that was bred as a hunting dog. It can give birth to 4-6 puppies at a time. Although a hunting dog, this breed is known to make a great family companion due to its loving and friendly nature.

The puppies developmental process of the Cirneco dell’Etna is fast compared to large sized dogs due to its small size. It has a different behavior in different months until it reaches adulthood.

In this article, you will learn about the development stage and the behavior of the Cirneco dell’Etna’s puppies in different months.

The newborn Cirneco dell’Etna puppies are completely blind, deaf, toothless, and are not able to walk. They rely on the mother for warmth, defecating, and cleaning their body. Newborn is a very critical stage for the puppy as they cannot keep themselves warm and rely on their mother for heat. If you separate the puppies from the mother, they might soon die of hypothermia.

Since the puppies cannot see and hear, they depends on their sense of smell and taste to get to their mother and the milk. The puppies also are not able to stand and support their body, so they move here and their by crawling.

The first two week of the Cirneco dell’Etna birth is called the neonatal stage. The puppies are born furry and not hairless. The first week of the puppy’s brain activities has no difference while awake or asleep. The mother take care of all the needs of the puppy from nursing them to cleaning their pee and poop.

During the second week of the Cirneco dell’Etna puppy birth, it starts to open its eyes slowly and begins to hear faint sound by 14-20 days. Due to their constant crawling the muscles starts developing and the forelegs gets stronger.

The time between 2-4 weeks is the transitional period of the Cirneco dell’Etna puppies. They are able to see, hear, stand, and also wag their tail. They starts making their own vocabulary to communicate with their littermates. You will see them walking their wabbly walks. The puppies are also able to generate their own body heat and keep themselves warm and cozy.

By the fourth week, the Cirneco dell’Etna puppies are active than ever. They will run around chasing their littermates, biting them but not in a hurtful way. you will see their teeth coming out and they start teething things. At this time, the puppy will sample solid food from the bowl of their mother while still feeding on the mother’s milk.

At this stage, the Cirneco dell’Etna puppies have grown old enough to explore the outside world. It is the best age for their training and socialization. By the fifth week, you can see your puppy barking properly while being a bit noisy. They learn differently dog posture and learn to communicate with other dogs with different vocalizations.

As the puppies get 6-7 weeks old, basic training like potty and obedience should be started. They are very eager to please their owner at this age and are quick at soaking up information. When the puppies get 12 weeks old, it is time for their exposure to the outside world.

In the Juvenile stage, the Cirneco dell’Etna puppies have lost most of their puppy’s face and start looking more like an adult dog. They become noisy during this period and their baby teeth start to fall out at 4 months old. Since it is a small dog breed, the growth plates start to close out slowly.

Training should be continued with more new tricks and challenges. Socialize them with different people and dogs so they get comfortable around all kinds of people and dogs. Buy them chewy toys, so they do not damage things in the house.

When the Cirneco dell’Etna puppy crosses the 6 months of its birth, it gets into adolescent stage. Now it loses the puppy face and look like an adult. The female will experience her first heat during 6-7 months which attracts male. Although the female can give birth at this age, it is not right time to involve them in breeding. It will harm their health and also they are not ready to be a mother so soon. Wait until the Cirneco dell’Etna gets 18-24 months old.

When the Cirneco dell’Etna is in its adulthood, starts providing him with advanced training. It is a very active dog breed, so agility is important for them to have mental stimulation.

Provide them with quality adult food with all the nutrition needed for them. Do not give them puppy food as their diets and nutritional needs has changed.

According to the American Kennel Club, the vaccination cost for DHLPP is between $75-$100. For rabies vaccine, the cost is between $15-$20.

Visit Doglime for more dog breeds information and their puppies.