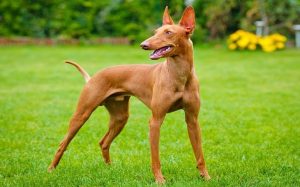 The Cirneco dell’Etna (pronounced as sheer-nek-o) is a small to medium size hunting dog with a short silky coat. They have a long pointy muzzle with very high triangular ears set close together like an alert dog. The body is slender and thin but very powerful.

The Cirneco dell’Etna is a sighthound who used to track his pray using sight, scent, and hearing. They are known for their swiftness, stamina and flexible gait.

Cirneco dell’Etna was in Sicily. Cirneco means “dog of Cyrene (Libya) which is derived from a Greek word. Whereas, dell’Etna is from the name of Mount Etna, the largest active volcano in Europe. They looked like a smaller version of Pharaoh Hound, the cousin from the island of Malta.

Cirneco dell’Etna were originally bred to hunt rabbits and other small game using their sight, scent, and hearing. They stalk so quietly that they can even sneak up on birds. Although Cirneco dell’Etna looks delicate, they are tough and can even go hours and even day without food and water for hunting in the extreme hot terrain.

Cirneco dell’Etna is registered in American Kennel Club, which is recognized in 2015. It ranks 183 of 193 among the registered breed of AKC.

Cirneco dell’Etna is tolerant of children and makes a great partner for them. Although younger children can play rough and Cirneco dell’Etna may become defensive which can lead to biting. Therefore, proper supervision is necessary.

If you are considering to keep this dog in a house with small children, make sure to socialize them and raised them together.

Behavior: Cirneco dell’Etna is naturally a hunting dog who loves to chase small animals. This behavior of them came from their ancestor sighthounds. To avoid this behavior, he should be kept in a well-fenced area.

Temperament: Cirneco dell’Etna is of curious and playful temperament which makes them a great family companion. They are lively and want to be occupied with some household work or fun games. Keep them occupied to avoid any destructive behavior due to boredom.

Personality: Cirneco dell’Etna is of friendly, smart and affectionate personality. They adore children and are typically tolerant of them. However, they are little reserved around strangers, therefore, early exposure to a variety of people is necessary.

Cirneco dell’Etna is moderately trainable as they are an independent dog, they can be stubborn sometime and do not want to listen to you. They are eager to please their master, so they respond well to gentle and positive training. Present treat as a reward and a gentle pat on his back which will keep him motivated.

Keep the training session short and entertaining with no repetition of the task. Include tricks and fun games so that they won’t get bored easily.

Cirneco dell’ Etna is a tough breed that was developed in an isolated place. There is no serious health condition that can cause to them. However, they might suffer from canine diseases in their 12-15 years of life span. Some of the health they might face are:

Cirneco dell’Etna comes in two different colors which is chestnut and tan. They come in white marking in either of the two colors.

The average cost of a Cirneco dell’Etna puppy is somewhere between $800- $1200 USD. Price may vary with the quality of the dog.