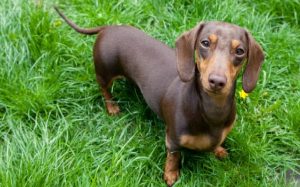 The Dachshund is a small-sized dog breed that is originated in Germany to hunt badger. They have a long body and short legs that are covered with either long or short fur.

They are great with a family that is loving and active. Apartment life is best for them due to their small size and their minimal activity level.

If you are thinking to own a Dachshund, it is important to know their temperament. Knowing their temperament and behavior makes it easy for you to choose the best one that is suitable for you.

The temperament of the Dachshund is curious, courageous, and spunky. They are very courageous that will face any animals even if they are large. They are very alert that makes an excellent watchdog.

If they sense any unusual activities going on in the area, they will bark and warn their owner. Due to their friendly and watchful nature, Dachshund makes an excellent companion for a family of all age.

As Dachshund has the history as a hunting dog, today’s Dachshund tends to chase small animals on the yard, dig, and sniff unfamiliar stuff. They are stubborn sometimes and if the things do not go on their way, they might become destructive.

Although this bad behavior of them can be corrected with the right training by a patient and consistent leader.

Personality of the Dachshund

The personality of the Dachshund is very friendly, loving, and fearless. They are great with children but might not do well with other pets in the house. However, if they are raised together from an early age, they can be friendly with other pets as well.

They are a loyal companion that forms a strong attachment with its people. They choose one particular person from the family and see them as their leader.

Training Dachshund can be tough due to their stubbornness behavior but with a good leader, it can be trained. The training should be consistent and firm. You should not be harsh on them and train them with gentleness. Use positive methods of training by rewarding them with treats and lots of vocal praises. Do not always feed them treat as they might face the problem of obesity.

Dachshund does great with children as they are playful and loving towards. Small kids might play rough by hurting dogs, so their interaction should always be supervised by an elder. They do well with older children who know to handle them and behave around them.

Dachshund is not an aggressive dog in general with people but they can be aggressive around other dogs. They might be involved in fighting with other dogs and around strangers, they will bark but are not likely to bite them unless they sense a threat.

How Does Dachshud Behave Around Strangers?

Dachshund is suspicious of strangers, so if they see one approaching the, they will bark to warn their owner. Therefore, they make great watchdogs. Early socialization is necessary so they do not become aggressive around an unfamiliar person.