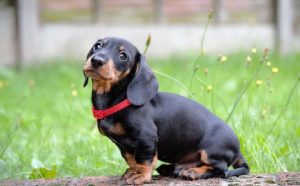 With their long body, big ears and bright adorable eyes, you won’t be able to stop adoring as well as laughing with the comical personalities of the Dachshund.

Dachshunds small sized dogs yet brave and ferocious. Don’t judge them on the basis of their size! The tiny little dog has a deep gruff bark which makes them sound like . If you’re planning to own one, then there are certain things you need to consider about Dachshund.

Where Do Dachshund Originate From?

Dachshunds were originated from Germany in the early 1600s to hunt badgers. In Germany, ‘‘ means ‘badgers’ and ‘‘ means ‘hound’, that’s where they got their name from. Dachshund strong legs which they use for digging out their prey and fit inside burrows. They are still used as hunting dogs in and as in the United States.

Since Dachshunds like being in a pack, they enjoy the company of the children who can give them enough time while playing. Your long bodied pet may be the best play-mate to your kid but not really fond of your kid’s friends. They are wary of strangers and a well protector of their family and territory.

Because of their unique body type, it is hard to carry them if you are not experienced. Your kid may become accidentally hurt while carrying them the wrong way, they may become aggressive and irritated. You should always supervise your child and your pet while playing.

Despite their size, Dachshunds are known for their courage and will sometime jump on larger dogs or animals to dominate or to show their bravery. Dachshunds are smart and independent dogs. Due to their intelligence, they will need to be engaged with regular training sessions and exercise.

Dachshunds love being the leader which often lead to stubborness and aggression. However, once they accept you as their boss, then they will be extremely loyal towards their owner and family. It may become frustrating to the owners because of their stubborn nature since they were bred to hunt and will make their decision on their own.

An early training will help you to transform stubborn pet into easy to train and dog. If you raise them with proper training and give them enough time there is no better breed than Dachshund. They will leave their independent streak and will follow you wherever you go.

The important part of training your Dachshund is, to see you as a leader. If they don’t, they may start dominating and show aggressive behavior to you. They believe that they are the in charge of everything and will do their things on their own.

Dachshunds are difficult to house train whereas, treats or reinforcement may help you. The treats may work but they are not the type of breeds which will perform the same tasks over and over again. You will need to send them to obedience classes as early as possible to avoid such behaviors.

Not all the Dachshunds are prone to diseases but it is important to be aware of your canine health issues. The common health issues found in Dachshund are as follows.

Canine Diabetes Mellitus: If the Dachshunds are over weight, diabetes are occasionally seen in them. However, it can be treated with insulin and proper diet.

Cushings Disease ( Hyperadrenocorticism ): This is a type of condition when the body produces too much of hormone called cortisol. One of the reason of this disease is an imbalance in the pituitary gland or in the adrenal gland. It can be treated with the removal of gland or regular medications.

Intervertebral Disc Disease ( IVDD ): Due to their low and long body, Dachshunds are prone to have back issues. This may cause due to genetics or jumping and falling of the furniture. Its symptoms are, difficulty in raising up the rear leg, paralysis and sometime loss of bladder control. It can be treated with anti-inflammatory medications, removing the disc that are causing problems and confining your pet with a doggie wheelchair.

The price of the puppy varies from the quality and the characteristics of the puppy. If you want one, then it will cost you somewhere around $200-$1000. It also depends on the breeder you buy from. Always buy a pet from a reputable breeder to get a healthy dog.

Which Dog Breeds Are They Similar To?

To wrap up, it is important to remember that training takes time and it depends on how you treat them. If you treat them harshly you cannot expect them to love and respect you. Dachshunds are born stubborn so it is your duty to change them through training and affections.