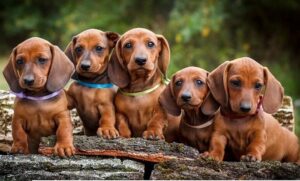 Dachshund puppies are adorable dog famous for his long-backed body with little leg that comes with big personality. They are lovely, loyal and affectionate that make good family companion if socialized at early age with children. It can give birth to 4-6 puppies at a time.

With their adorable and goofy looks comes great responsibility as they grow through various changes and development while growing up. However, small-breed dog hits maturity faster than larger breed.

When Dachshund puppies are born they have closed eyes, ears and are toothless but have a sense of smell to get close to their mother. They won’t be able to see or hear for the next two weeks and totally depends on their mother for everything. Mother’s milk is the only food that should be fed to them as it’s rich in colostrum that protects them from any health problems. All they do is eat and sleep for their development as changes in their body, brain, and weight can be seen at the end of the two weeks.

During this stage, don’t separate them from their mother as the loss of warmth can be the cause of their death from hypothermia. However, if a separated newborn is found then you can feed them milk and keep them in a warm place. Mother dog also helps to pee and defecate by licking around their genitals for the first several weeks. But if you are raising an orphaned pup, you can use warm damp cloth or cotton to stimulate the area.

The Transitional Stage: 2 to 4 Weeks

In this stage, your pup finally starts to open his eyes and ears but still his vision will be blurry and slowly starts to develop in few weeks. Not only they see or hear, but Dachshund also learns to stand and walk with a wobbly gait. Their baby teeth also known as “milk teeth” begin to come at this age. As for now, they need more solid food than their mother’s milk. Their new baby teeth start to itch and they chew can chew anything around them so, buy chewable toys to avoid destruction.

Then they start to wag their tail, start barking and whining to communicate with other. During this time, your pup will play with its littermates and will grow to double its weight. At the 3 or 4 weeks, your puppy will naturally get the ability to defecate and pee on their own.

The Socialization Stage: 4 to 12 Weeks

When your Dachshund reaches this stage they start to show personal traits that can last till a lifetime. This stage is very important for them as they interact with other humans and canines where they also start to be more confident, independent, and playful. Slowly their mother stops cleaning their toiletries to you as she loses interest in cleaning them.

Then in between 6 to 8 weeks expose them to the outer world where they could socialize properly. But remember to interact with the family member first as sudden outer socialization can make them aggressive to people around them. In between the same time, you can start their potty training and some basic obedience training at home hence it’s their perfect age to learn these things.

The Juvenile Stage: 3 to 6 Months

Between 12-16 weeks, the Dachshund puppy will look more adult version of himself looking less like a puppy. They start to grow rapidly for over six months as Dachshund is small-breed it will nearly finish growing by that age. The pup shows its teething-related issues where they get frustrated and be picky on foods for certain days. Around 16 weeks or 4 weeks their teething will fade away and a full set of teeth will be ready in six months.

Not only their body grows through some changes, but their mind is also developing alongside as well. During six months, their body is fully grown whereas emotion and mental behavior takes place till they are fully grown. Obedience and basic training will be easier at the time than before.

The Adolescence stage is where your dog’s body and mind have fully developed which calls for advanced training. Be patient and establish leadership among your pet as your behavior matters most during the training session. Don’t raise your voice or give physical punishment as it can leave a bad impression on them which can also backfire in no time.

The female dogs also experience her first heat at the moment where she is able to mate and breed. Likewise, the male dog also shows more interest in females and wants to mate with each other. However, mating is strictly prohibited as their mind are not prepared for it and can affect their health.

According to the American Kennel Club, the vaccination cost for DHLPP is between $75-$100. For the rabies vaccine, the cost is between $15-$20.