Demon Dogs and Their Names – Myths and Belief 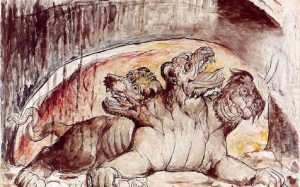 You probably should have heard about demon dogs and their stories from grandparents. Though they belong to myths, they are believed with different beliefs and aspects in different countries of the world.

Dogs appear to be ghostly in myths in almost every culture of the world. As lovable as our dogs to us, they are also perfectly fit for ghostly stories and beliefs. Here are some of the demon dogs from myths and beliefs of different parts of the world.

According to Chinese mythology, a black flying dog Tiangou is responsible for eating the sun during a solar eclipse as some dogs will eat anything they like. The myth further states that Zhang Xian, god of birth, fires many arrows at the dog to repulse him off from the star. As a result, Tiangou gets scared and throws up the sun that he swallowed. Hence, our Sun is safe and a little salivated.

According to Japanese mythology, the demon dog Okuri-Inu is monster that indicates both good and bad news. The belief revolves with the good news being that the ferocity of this dog keeps other demons away while he’s following. Whereas the bad news is that if you stumble when walking, Okuri-Iny is going to eat you up.

The myths suggest that you can fool the demon dog by pretending to stop on purpose to take a rest. It works by saying, “This is exhausting” or “I am sure glad to stop on purpose and go face first into the ground so I could check out this muddy thing” (or any other similar thing). At last, when you reach your destination, you should leave food as thanksgiving for not eating you. This makes sure that the demon leaves you forever, well according to the mythology.

Cerberus is the three-headed dog of Greek mythology that guards the entrance of the underworld allowing our spirits to enter but never leave. If the triple-cranium doesn’t put you down, the mane of snakes, lion claws and serpent tail will probably make you get your move out of there.

The Cadejo of Central American culture is a similar demon dog as the Okuri-Inu that either helps or eats you. According to the beliefs, this dog is of two types; Black Cadejo and White Cadejo.

While one protects travelers from theft and harm, the other one leads to danger and bad decisions. Furthermore, the belief states that it stands on two legs and can throw punches like a human. However, people still disagree on which Cadejo is which and either speaking or turning your back on them makes you go crazy. So, meeting any of them is not a good fate.

Mauthe Doog or Moddey Dhoo is a ghostly canine of a calf size that haunts Peel Castle on the Isle of Man. The guards of the castle saw the black dog ghost so often that they eventually became less fearful of it.

According to myth, a drunk guard of the castle went down a passage to confront the ghost dog. He came back being too terrified to speak and eventually died three days later. After that, people sealed the passage and it was never used again. However, the sightings of the dog still continued.

According to the myth of Cambridgeshire, the Shug Monkey is a creature which has the features of a dog and monkey that haunted Slough Hill Lane. People believe that this creature has a body of a jet-black shaggy sheepdog with the face of a monkey. This strange creature with staring eyes was considered a supernatural ghost or demon.

According to western Japan, Inugami is a spiritual possession by the spirit of a dog. It is a Japanese urban legend that is created when a dog transforms into an evil spirit which is extremely evil and shows terrible cruelty.

The Black dog is a ghost or demonic entity found mainly in the mythology of the British Isles. It is essentially associated with the devil or hellhound. Myths suppose this dog to be larger than a normal dog with large glowing eyes. Furthermore, people believe that it is directly harmful.

According to Catalan mythology, Dip is a black, hairy, evil dog that is considered to be an emissary of the Devil which sucks people’s blood. This dog is lame in one leg as other figures in Catalan myth.

A Hellhound is a supernatural dog in almost every mythology. It refers to a wide variety of hellish supernatural dogs with mangled black fur, super strength and speed, phantom features, a foul odor, and glowing red eyes. Some European historians state that if you stare into a hellhound’s eyes three times or more, you will surely die. So, be careful.

Some other Demon Dogs

Here are some of the demon dogs aside from those given above:

Demon Dogs is also a best Hot Dog selling restaurant in Chicago and hence the world.