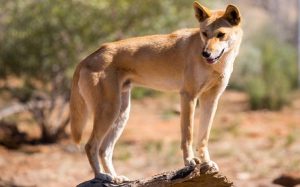 Dingo dog which is also known as Australian Dingo is a medium-sized wild dog. It is also popularly known by many names like Australian Native Dog, Maliki, Warrigal, Noggum, Mirigung, Boolomo, and many more.

It is neither a pure dog nor a wolf which is why its owner should be an experienced dog owner that can handle all of its energy and intelligence.

The Appearance of the Dingo dog is sturdy and hardy. They are a very adaptable dog that can survive in a harsh environment too. It is considered wild that is mostly seen strayed away from the human being. They feed on rabbits and other small animals and are usually seen in a pack.

Although they are not a pure dog breed, most of the Dingo owners have a great experience with them.

Temperament of the Dingo Dog

The temperament of Dingo Dog is independent, loyal, and active. Since they are wild dogs, they are known as self-sufficient and very energetic that will not at all do well in a house with inactive people. They are not widely kept as a pet as it is illegal to keep them as a pet in some country. Their independent nature makes it hard for a novice owner to handle them. So, an experienced dog owner is needed to own this primitive dog.

Dingo is a very active dog that has a mind of their own and likes to do things on their own. They need a good amount of physical exercise regularly so, it is best for you to take them for hiking, jogging, and other physical activities. If you are into running then Dingo is the best companion for you as they are very fast, active, and tireless dogs.

Personality of the Dingo Dog

The personality of the Dingo dog is gentle, friendly with its people and aloof of strangers. They have very high stamina, agility, and are very alert and smart. If there is anything unusual activities going on in the area, they tend to bark and warn their owner. So, they also make a great watchdogs as well as a gentle family companion.

They are also stubborn and independent in nature which makes training very difficult. So, establish a firm and consistent leadership upon them at a very early age. If you fail to set a leadership upon them, they will end up being your leader. Start from basic obedience training and move to agility. Reward them with delicious treats and lots of vocal praises as a source of motivation.

Dingo dog is a wild dog that is not recommended in a house with children. Although if they both are raised together from an small age, Dingo is known to get along with kids pretty well. It is gentle and loving of them. However, elderly supervision is always necessary when they both are interacting to avoid any kind of accidents.

Dingo is gentle and loving with its people but can show aggression sometimes to an unfamiliar person bu are not likely to bite if it is well trained. They need proper training that includes stopping when being commanded, so when they show anger towards something, they can stop when being commanded.

How Does Dingo Dog Behave Around Strangers?

Dingo dog is suspicious and wary of strangers that do not trust them on their territory. If someone approaches them, they are very likely to bark at them and warn their owner. Socialization with a variety of people at an early age is necessary.