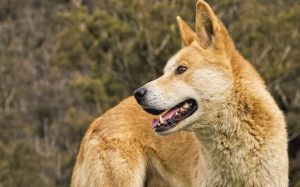 Dingo is a medium-sized dog that is the native of Australia. It is also known as Wild Dog that is not completely domesticate. It is neither a wolf nor a complete dog, so the words lupus and familiaris are lost from its Latin name.

Dingo dog is a very adaptable dog breed that can adapt to any kind of harsh weather. The appearance of the Dingo dog is lean, muscular with a longer muzzle and flat skull. The coat is short and the tail is generally bushy.

The exact origin of the Dingo dog is unknown but it is believed to be originated in Australia. There is still some uncertainty whether the Dingo is half-wolf, primitive dog, half dog or some other species. There is a theory that they were brought by the migrating tribes in Australian some 4500 years ago. On their arrival in Australia, Dingoes were mostly kept by the Aboriginal groups as watchdogs and even a source of food in emergencies.

The Dingo is not considered as a purebred yet, so it has not been included in the FCI group. However, it still is a primitive dog breed.

As Dingo is considered as a wild dog, people believed that they should not be kept as a family companion. However, Dingo too has its admirer and they have become quite popular with some owners that have started breeding them as a family pet.

Dingo dogs are generally shy towards human beings but according to the owners of Dingo, it is said that with early socialization and blending with a variety of people, they will get along with them. They are a highly territorial dog that is seen in the pack, mostly when there is prey. Their pack often consists of mated pair but few captive packs can also be seen.

Dingo is a very independent dog which makes training them very tough. The only way to train them is with consistency and positive methods of training. Establish a firm leadership at an early age when they are eager to please. Start from basic obedience training and gradually move to advance training. Reward them with vocal praises ad treats as they complete a certain task.

Dingo is known as a wild dog so it is not best to keep a dingo when you have children at home. If you are considering keeping one, it is best to keep them with older children who know to handle dogs and behave around them.

Dingo is generally a healthy dog that can have a few possible health problems.

The Dingo dogs come in the following colors:

Height: The average height of the Dingo is between 20-24 inches.

Weight: The average weight of the Dingo dog is between 50-70 pounds.