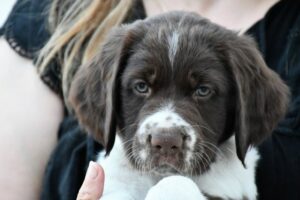 Drentsche Patrijshond is an Intelligent, loyal, and sensitive breed having some best qualities than any other breed. They are a highly-active dog that needs hours of walk daily with exercise and active play session. They are friendlier and easy to train breed that wants to please their owner.

While growing, your Drentsche Patrijshond goes through many physical and mental changes. So you have to know several things about them before owing them. Here in this article, you’ll learn more about their growth from puppyhood to adulthood.

When Drentsche Patrijshond is born they totally depend on the mother for their growth. As they are born with eyes closed and can’t hear anything for several weeks. In addition, they are senseless and can only smell which helps them to get closer to their mother. Don’t open their eyes and ears as by the end of the second week it’ll open automatically.

Newborns can’t regulate body temperature so, any pup separated from the group is likely to die from hypothermia. They get heat from their mother as well as littermates by staying together. Only feed mother’s milk to the pup as it helps to make them stronger and help to fight against diseases. Moreover, take good care of the mother as she’s looking after her multiple children at once.

This is the stage where you witness several changes in your pup. At first, your eyes and ears are open, but your vision will remain blurred for a week. In addition, they also develop another sense during week 3 which is a sign of growing properly. As for now, they also can eat solid food apart from their mothers’ milk.

In addition, the puppies will begin to wag their tails and learn to communicate with other littermates. Also, they learn to walk for the first time and at least learn the wobble walk at first. Slowly, they start to get curious of their surrounding and tries to escape their weeping box.

The socialization period is very important for every dog after they escape the weeping box. This age is where they learn to socialize with other humans, canines, and pets. It helps them to get confident, less aggressive, and stay in good behavior. Make sure they interact with everyone and develop good social as well as communication skills.

Take them to walks daily so they behave properly both indoors and outdoors around strangers. You can also take them to a park, socialization class, coffee shops, and other places for socialization. Apart from socialization, start their basic and obedience training.

Juvenile Stage is also known as the Ranking stage is where your pup get influenced by the behavior of their littermates and human. They learn many things from each other and try to copy anything they see with others do. Moreover, now they know the difference between dominance and submission so early training is essential. This time you have to introduce yourself as their leader.

During this time, they continue learning basic training to be consistent in it. They start to become mischief at this time so chewing and teething are common. Don’t leave your personal belongings in front of them as they can damage them. By the time they are 6 months, start their advanced training along with agility, dog sports, and other games. Use positive reinforcement and a positive attitude during this phase.

At this age, Drentsche Patrijshond is no longer your puppy as they have completely gained their adult face and got into adolescence. They now have a full set of adult teeth which again calls for teething so be extra careful now. They now can question your leadership so, with positivity and continuous training remind them about being a leader.

Vaccination Cost for the Drentsche Patrijshond