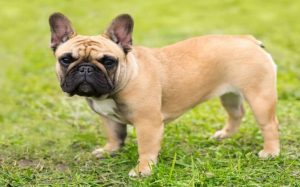 An oddly beautiful with bat ears, French Bulldog are the best choice for those who want intelligent yet cute and small dogs. It is the miniature bulldog with distinctive bow-legged gait. Despite their glum expression, these French Bulldogs are comical, entertaining, and loyal dogs.

So, to deal with a French Bulldog, you need to know about the character and personality of the adorable french bulldogs.

French Bulldog are often full of energy but love to sleep all day in your couch. Frenchies are people dogs and they don’t like being left alone. People who work for long hours should not own a French Bulldog as they easily develop separation anxiety. They can be little hard to house train since they are lazy and stubborn until they are offered some treat.

Not only that, they can be destructive in home without proper guidance. They are ‘rough players’ and will likely to play ‘tug of war’ against inanimate objects.

As their age grows, French bulldog become more stubborn, if not treated early, then it becomes a serious matter. They can be so stubborn at some point that they will simply refuse to learn or follow the rules in which they might get aggressive.

How Do They Act With Other Pets?

Being a social dog, they are very friendly with any kind of pets. Whereas male Frenchies can be aggressive with other male breed. Otherwise, it is very safe to introduce your bat-eared pet with any other pets.

In fact, you should be more concerned about other animal hurting your dog as they are very small in size.

Like any other dogs, you should socialize your dog with other pets at an early age for best results.

What Kind Of Personality Do French Bulldogs Have?

French Bulldogs are very playful and loving dogs. This dog can cheer up your boring day with its lively demeanor. They really enjoy curling up on the couch with their owner. With a Frenchie, you will always have someone waiting on the door as French bulldogs are known to love their family unconditionally.

They are also loyal and clingy and gets along in every kind of situation as long as its not too cold or too hot. They love meeting new people and like having at least half an hour walk.

Are They A Good Play-Mate For Your Kids?

Of course! French Bulldogs are very good with children young or adult. As mentioned before, Frenchies love companion, it includes kids as well. A Frenchie can play and have a lot of strength to handle your toddler. They are not bothered or irritated with the noise made by children. The best thing they can do is, sitting on a couch and watching cartoons with your children.

Note: No child should never be left alone with a dog. They might accidentally hurt your infant while playing. They need to be supervised.

How It Feels To Live A Bulldog?

If you want a small dog to fit in your apartment with a clownish personality then French Bulldogs may be the right dog for you. You will have a dog who will be like your baby needs care like an infant and in return will love you more.

They are eager to please kind dogs. French Bulldogs are a good entertainer and also can feel whether you’re happy or in grieve. They make a fantastic companion in the family.

To wrap up, French Bulldog have an extremely positive disposition. However, it is important to remember that, unlike humans dogs too develop their personalities based on their biology and environment.