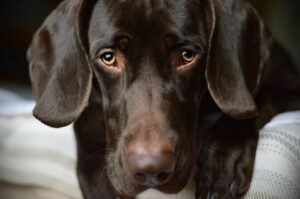 German Pointeraner is the mixture of two hunting breeds German Shorthaired Pointer and the Weimaraner. They are active breeds with great hunting skills and do well in both land and water games. In addition, they are very intelligent, loyal, and affectionate towards their loved ones. It has a large body covered with medium and straight coat texture.

These breeds are family-oriented and seek more time with their family members. Also, they want to get involved in different family games and events to be closer. They need daily exercise with some walking, running, and playtime so, it’s best for active owners. Moreover, they look for a strong owner who known how to handle them.

As for German Pointeraner date of origin is not known till this date however, it must be after the 19th century after the known existence of the Weimaraner. The new breed German Pointeraner has a lot of mixed factors of two different breeds and was bred for hunting games.

Being a hybrid breed, German Pointeraner has mixed factors of two different parents. They are an energetic, loving, confident, and easy-going breed that makes a great companion. Additionally, they are very alert and protect family and home from strangers as well as threats.

Their confident nature makes them ready for any danger to face head-on. These breeds are easygoing and don’t get nervous easily. However, being a friendly dog they want someone’s presence or they might develop separation anxiety.

They can get along with other pets if socialized properly from childhood. Socialization also helps to make proper behavior if they show any personal traits. Provide them an environment where they get involved in family fun as well as a busy time for mental stimulation. Keep them busy in daily activities that help to keep them away from being mischief and destructive.

German Pointeraner is easy to train as they are eager to please their master. It needs a firm and powerful leader that shows dedication and consistency in their training. As an intelligent breed, Pointeraner soaks up command and training easily that makes the session more fun for the dog and owner.

They might show stubborn or rebellious behavior during training. To prevent it, socializing and treats helps to keep them focused. Start early training and make a base of training from their childhood.

The German Pointeraner is an excellent family dog that needs attention and love from the family. They are playful, enjoyable, and get along with any age group. They get along with children however proper socialization is a must for both dogs and children.

In addition, during their playtime supervise them as Pointeraner can show aggression and harm children by accident. Also teach your child to be around them so they won’t do something that irritates the dog-like pulling the ear, tail, or hair, and so on.

Hip Dysplasia: Larger dogs like German Pointeraner are likely to deal with hip dysplasia. This health issue passes down by the parents due to heredity. This issue occurs during the growing stage that results in hip joint loosening that brings a lot of pain in dogs. There are different treatments like physical therapy, joints supplements, Joint fluid modifiers, and so on. In addition, consult your vet for proper treatment for your dog.

Bloat: It is a serious condition where your dog’s stomach is filled with gas due to food, fluid, or subsequent twists. This is a very common yet serious problem among dogs that is life-threatening. It can develop quickly anytime without any symptoms or warning so, always supervise what’s your dog is eating.

The German Pointeraner comes in the following colors:

Height: The height of male and female German Pointeraner is 17-23 inches.

Weight: The weight of male German Pointeraner is 45-70 lbs while the female weighs around 45-60 lbs.

The average price of the German Pointeraner is between 400-700 USD.