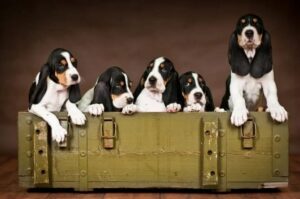 The Small Bernese Hound, also known as Berner Niederlaufhund is one of the four smallest scent hounds. The medium-sized dog was bred to hunt as the hunters were impressed by their hunting power. In addition, they have strong smelling power used in shooting sports.

Apart from hunting, they are active, intelligent, and loyal which are perfect for active families, hunters, and experienced dog owners. Their protective nature makes them stand for their loved ones in difficult situations. Also, they make an excellent watchdog for your family.

The Small Bernese Hound is said to exist from the 9th century as there are some paintings as evidence. However, they had leaner bodies than now in the painting. The breeds were under Swiss Alpine due to hunters’ scent and hunting skills. In addition, these breeds had smaller and short-legged around the 18th century. Later they bred with small Swiss Laufhund to make the size smaller suitable for hunting.

Small Bernese Hound is a happy, loving, and strong hunting breed that is well suited for a family home. It has a dominant behavior due to strong hunting instinct and needs a strong leader. Also, they aren’t suitable for apartment owners or homes with small yards. They do well in the wide space area where they can run and train freely. In addition, early socialization is a must so they won’t have personality traits growing up. Socialization also won’t let dogs develop destructive behavior at home.

Always use positive reinforcement while training as it builds strong bond as well as maintain trust and respect. In addition, a dog becomes less aggressive and helps to avoid anxiety or depression. Remember not to use physical punishment and harsh words as it might backfire.

The Bernese Hound is an intelligent dog that soaks up any command or training session easily. However, they need an experienced trainer as it’s difficult for first-time owners during training. They can be stubborn at times that makes little hard for most trainers. This breed needs a strong leader that has firm and consistent during a training session. They respond well to positive reinforcement and perform well. Start training at an early age that develops good behavior from starting.

As a friendly breed, the Small Bernese Hound does well with children and is generally good with them. They make fine playmates that go for hours in the playground or backyard with kids. Moreover, they are also friendly with other pets however supervisor is a must. As a scent dog, some don’t like small pets like guinea pigs, rabbits, ferrets, and others. Teach your dog to behave around kids as they can get aggressive and the same goes for your children as well.

What Health Issues Do Small Bernese Hound Suffer From?

Patellar Luxation: It’s a condition where the luxating patella is dislocated or out of place from its original location. You may notice dog skipping their steps while walking. They can show symptoms like limping, weak legs, swelling, and others. So, consult your vet for proper treatment as some might need surgery.

Skin Allergies: Skin allergies are a common thing a dog might go through. However, in Small Bernese Hound’s case, they can be more prone to get allergies. It can result in scratching, skin infection, licking, and so on. This lifelong condition needs well care and needs to look after more often.

Height: The average height of a male Small Bernese Hound is 13-18 inches while female stands around 12-17 inches.

Weight: The average weight of Small Bernese Hound is 18-33 lbs

One thought on “Small Bernese Hound”