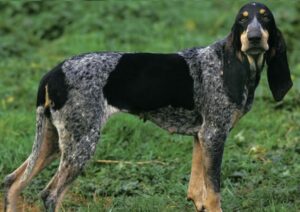 The Grand Bleu de Gascogne is a scenthound dog used to hunt in packs. They have a powerful body with a noble head and a muscular neck. The athletic scent hound needs a large fenced house or backyard to perform daily activities. In addition, they are easy to groom and don’t need extra care for their coats.

They are known for their excellent nose to find certain things. When they found an animal, the Grand Bleu de Gascogne use their stamina to lure them and communicate through howls and deep barks. These breeds do well in any kind of scent-based sports and competitions with dedicated owners.

The Grand Bleu de Gascogne exists from Medieval times in France. Then along with other French hounds, they arrived in England in the 11th century during Norman Conquest. In the 18th century, they crossed their path in the United States where their number increased more than in France. In the past, they used to hunt deer, wolves, and boars.

During the same time, they were bought to Uk for crossbreeding. However, they weren’t bred with any dog or registered Kennel Club dog until the mid-1980s. Still, there is a handful of breeders in the UK so, they are a very rare breed to pet. Later, their number began to decrease as the number of wolves also declined. In addition, Grand Bleu de Gascogne was expensive dogs hence, noblemen started to switch them to save their expenses.

The Grand Bleu de Gascogne is an intelligent, loyal, and energetic breed that has smelling ability than speed. They get aloof with a stranger but are very comfortable and friendly with their known circle. Moreover, they are more of an outdoor person and don’t suit the average pet home. Since they aren’t treated as domestic dogs they might take time to adjust to the family. Therefore, their household behavior totally depends on how the owner raises them. That goes without saying these breeds are not suitable for first-time owners as an experienced owner is necessary.

Training the Grand Bleu de Gascogne isn’t easy even though they are an intelligent breed. The independent breeds were built as working dogs. Include training to follow scent and add-on treats in between the session. Remember they don’t enjoy training for their sake or entertain you during the obedience training. Additionally, their achievement is to learn good habits instead of developing bad ones. You have to work hard with these determined breeds so they work for you with better training. Early socialization is a must with family members and other pets if you own them.

With their calm, amiable, and good nature, Grand Bleu de Gascogne is friendly with children. As a large hound, they slowly mature with time so as a puppy they get excited and bouncy with kids. However, you must supervise them during playtime at any age so they won’t hurt each other. Teach your pet and kids to get along and socialize with them as they might piss one another. For instance, kids might pull their ear or tail whereas your pet might get aggressive.

Bloat: Bloat or Gastric Dilatation Volvulus (GDV) occurs when gas or fluid twists in the stomach. It happens without any symptoms so be careful what you’re feeding. Always provide a healthy and balanced diet for your dog. Take them to a vet for a proper checkup if your dog experiences bloat.