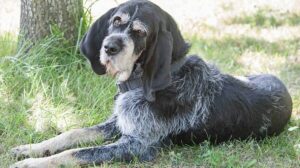 The Griffon Bleu de Gascogne is a medium-sized breed that is part of scenthound and hunting dogs. They are independent, energetic, and loyal breeds but a little slower than other hounds. However, works very hard and is dedicated to performing its task. In addition, this breed hunt in either pack or is fine hunting alone as well.

They make great companions for family and are quick learners. They easily get attached to everyone and treat them like their own family. Also, his breed needs maintenance and requires brushing each week with a pin brush or natural bristle brush. In addition, bathing them once a week is fine unless they become very dirty often.

The Griffon Bleu de Gascogne is an ancient breed that has Pyrenean origins bred in France. Several historians claim this breed is the result of a cross between Bleu de Gascogne with a Griffon Nervais. At one point they were in the verse of extension but were revived due to increase interest in their hunting skills.

They were used by the royals and commoners to hunt hare and other small games. Likewise, some used them to hunt wild boars when the situation rose to difficulty. They are among various hunting dogs that originated in France as hunting is a favored sport used to decrease the number of wild boar, deer, and other animals.

The Griffon Bleu de Gascogne is a loyal, affectionate, and gentle breed that gets excited easily. They are friendly with everyone and don’t know how to be shy or aggressive with strangers. Therefore, these breeds don’t make good watchdogs because of their friendly behavior. Also, they do well with other pets even though having an independent nature. They have a prey drive and great scent ability so any task regarding it makes them excited. As they were kept as hunting dogs, they don’t have proper experience with family. However, with proper guidance and early socialization, they tend to show good behavior and avoid bad habits.

As for training, the Griffon Bleu de Gascogne is relatively easy to train and is fun to have around. Although being an intelligent breed they are sensitive and require a calm and patient owner. For instance, raised voices or aggression might make them depressed. Whereas they respond well to the trainer using positive reinforcement. They require high activity level so engage them with around 60 mins of training or playtime per day. In addition, include more scent-related tasks to enhance their scent ability. Always remember to do basic training, obedience training, and socialization from an early age.

As mentioned above, the Griffon Bleu de Gascogne doesn’t know to act around children as well. However, their friendly nature towards others makes them great playmates with kids. Teach them to be around the kids and supervise during their playtime as they have high prey. Not only with kids but Griffon Bleu de Gascogne also get along with other small pets if socialized properly from an early stage. Also, instruct your kids on how to behave around them as sometimes they might get frustrated or violent.

Hip and Elbow Dysplasia: It is a condition where the hip and elbow joints are loosened from hip joints. This occurs when the dog starts to grow and the bone begins to wear down. They go through severe pain and difficulty while walking. It is usually a heredity problem so check before you bring them home as it isn’t always curable.

Ear Infections: Dogs with long ears are likely to have ear infections as the ear canal becomes home to several bacteria and yeasts. They tend to scratch and shake their ears that have a repellent odor. Keep cleaning their ears often to avoid the infection whereas adding medical drops and dry ear after bath or swimming.