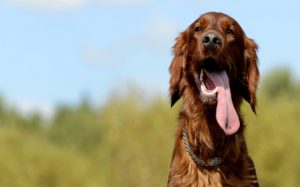 The Irish setter dog is an elegant, Mahogany-colored dog in the sporting group, as popular in shows as a hunting companion. While its immediate ancestors can be found in the literature of 16th century.

The Irish Setter were originally bred for bird hunting, but Irish Setters also make excellent dogs for active people. If you own them, they can give you the best company ever.

The Iris Setter dog has a vibrant personality to match his flame-colored coat. They were bred for bird setting and retrieving. The Irish Setter tends to have high metabolism and need more food than dogs of their same size.

They love to run and play and need regular exercise to keep them fit. They are very friendly to everyone, especially with kids. Irish setter is a very active breed and requires at least one hour of exercise everyday. The dog’s spirited nature, combined with its size, means its interaction with small children should be monitored.

Their outer coat is silky, long and straight and undercoat is thick enough to protect them from cold. They have a longer fathering on ears, back of legs, belly, chest and tail. Their head is long and lean with delicate chiseling along the muzzle around and below the eyes and along the cheeks.

Not just good looks the Irish setter is also blessed with strength and loving nature. This breed is suited for families that enjoy outdoors.  They tend to be outgoing and friendly dogs both with people and other dogs. They have an attitude for training, but if you neglect that then they will run on their own and can be barkers, chewers, diggers.

Are they Child Friendly?

Irish Setter tend to be friendly and a good companion for families, but they can be a bit big for small children.

But still if you have children at home and you crave to have an Irish Setter as your pet than its okay, they are not harmful for your kids. They will keep your kids busy in the backyard all day, whether they are playing, fetching or anything they do. The Irish Setter loves to be around people and loves to spend their time with them. They always create a happy moment in your life.

The Irish setter is highly affectionate and playful that enjoys to be around people. They are known to become very attached to the person with whom they spend much of their time. But because of his playful nature, long training can bore them easily. They often become sad when left alone for a few hours and their this sadness results in destructive behavior.

As they were bred for hunting so some cautions should be taken while introducing them to other small pets.


The Irish Setter originated in in by the year the Irish Setter was firmly the British . It is said that the original Irish Setters had white coloring with red patches on their coats, while Setters that we know today a deep, mahogany in color.

It is widely accepted that it came about from a blending of a number of spaniel and pointer breeds with the English and Gorden Setters, carried out in the 19th century by Irish hunters looking for a red colored fast dog who had a keen sense of smell that would be visible from long distances.

The Irish setter now remains at the most easily identifiable among all the Setters, and popular breed across the world. Irish Setter is not very assertive, and not recommend as guard dogs but they are very due to his this nature they for use in therapy.