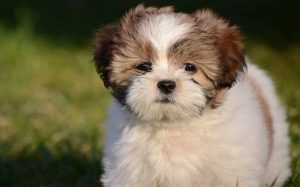 As every dog goes through a series of development stages before turning into an adult, the Lhasa Apso puppies also go through a variety of phases before becoming an adult dog. It is a very exciting moment as an owner to observe their every little change.

At the time of birth, the Lhasa Apso puppies’ eyes and ears are sealed meaning that they cannot hear and see in the meantime. Teeth development has not begun by this time; they are toothless. The puppies are dependent on their mother and littermates for their temperature regulation and mother’s milk for feeding.

As the Lhasa Apso puppies are born deaf and blind, they are not able to see and hear. However, they use their sense of touching to get near to their mother and siblings.

The Lhasa puppies are fully dependent on their mother’s milk for fighting against infections and gaining the immunity required for their body. This stage is a full development stage where the puppies will go through neurological changes.

The Lhasa Apso puppies go through some very exciting changes during the transitional stage. Eyes and ears that are sealed at the time of birth open and they’ll be able to see and hear.

The Apso puppies are influenced by their mother and litter-mates. Teeth start to appear and the puppies will be able to stand, walk a bit, bark and wag their tails. Eyesight is properly developed by the end of the fourth week.

During this stage, the Lhasa Apso puppies need occasions to meet other pets and new people. They become aware of their surroundings, companions, and relationships which make play important.

The Lhasa Apso puppies require positive human interaction as they develop curiosity and new experiences. The puppies learn to play, develop social skills and explore their surroundings. They have full use of their senses by the 9th week marking the appropriate time to start their training.

Juvenile or the Ranking stage is the pre-adolescent stage of the Lhasa Apso puppies. They will experience minor but effective changes in their behaviors. Teething and mouthing are something to be considered as teeth development are completed.

Domination and Submission within the pack and people increase. This means that the Lhasa Apso puppies will start challenging you for the authority of the leader. Alpha dog training should be given in time.

The behaviors and appearance of an adult Lhasa Apso are developed in the puppies during this stage. They are highly influenced by the interaction with human and dog “pack” members.

From the 7th month, the puppies will start exploring more of their territory. Sexual attraction towards dogs of the opposite sex increases if not spayed or neutered. Obedience classes and training should not be missed.

Visit Doglime for more dog breed and their puppies’ information.