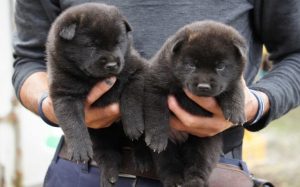 The Kai Ken is a medium-sized dog breed, they have an intelligent, active and friendly temperament from their puppy age onwards. The Kai Ken puppies require an appropriate diet.

When you adopt a Kai Ken Puppy, you need to ensure that they avoid excessive running, jumping and playing, as this can be hard on the developing joints.

The Newborn Kai Ken is blind, deaf and toothless. At that time they are even not able to regulate their body temperature themselves and depend on their mother and siblings to make them warm.

Since the birth of 2 weeks, the Kai Ken unable to look and hear but are able to feel and smell which helps them finding mother’s breast. The first mother’s milk helps them fight against diseases and infections and provide them immunity.

The transitional stage is the second stage of a puppy. In this Kai Ken has lots of changes in them like their eyes and ears starts opening and they start analyzing surroundings.

This is the stage where a Kai Ken puppy is able to stand and walk and can bark at a low pitch.

By the end of this stage, Kai Ken should be taught to use the bathroom by themselves.

At this it is important to interact them with people and so that when they become adult they won’t be reserved with strangers.

During this stage, the Kai Ken Pups starts exhibiting independent behaviors. This stage is like an ‘elementary school age’ where they are most influenced by people and friends. At this stage, they start developing mentally and their full teeth are grown u till 6 months.

Adolescence begins when the Kai Ken puppy reaches puberty, which usually occurs between six months to one year of age. At this stage, their brain is fully developed and learning capacity also increases. Y

You will find you Kai ken little challenging as are independent by nature and can be likely to ignore you or less respond to training. The use of positive reinforcement can help you prevent these problems.

As you have known all the behavior development of Kai Ken, make yourself ready to deal with Kai Ken by being firm with them while training, so that it will be easy for you to handle them.

Visit Doglime For More dog breeds information and their puppies..