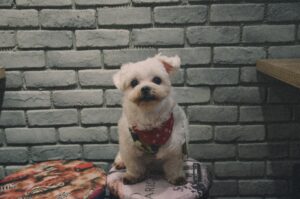 The Maltese, a dog breed believed to originate in Europe, belongs to the toy group. Their ancestry traces back to the Isle of Malta in the Mediterranean Sea from Spitz. Hence, the name Maltese.

The hound was typically raised by royalty back in the day. The preference by the rich is because of Maltese’s sophisticated looks. Due to this reason, breeders sold a pet as high as $2000 equivalent in the 1500s.

Like any living organism, Maltese go through different stages of growth and development before turning into full-grown adults. If you are looking to adopt a Maltese, here is everything you need to know about the phases this canine passes through.

Maltese litter is born at the average size of 2-5 puppies. However, the birth of just one pup is not unheard of. When the Maltese puppies are born, their eyes and ears are sealed. As a result, the newborns are both deaf and blind.

The puppies weigh about four ounces at the time of their birth. Maltese pups’ ultimate support of survival is their mother, whom they rely on for warmth and food.

Since the newborn stage is the initial stage in developing a puppy, the newborns require extra attention and care during this period.

The neonatal stage is the early stage of the pup’s life. From birth to when they’re 4 weeks old, the little puppies develop their sense of sight and hearing. It is the stage when her other senses evolve.

In addition, the baby teeth start to come in during this period. Also, the weight increases by 10 ounces, and her white fur becomes thicker. However, the pups are entirely dependent on their mother despite their initial growth.

As the little fur babies turn three to four weeks old, that’s when their weaning begins. After that, the pup starts to stand up and cautiously explore her walking ability. After that, however, she is dependent on her mother and her littermates for socialization.

Despite being old enough to interact with humans and other animals, the weaning period is not appropriate to separate her from her mother.

Till this time, the food she consumes is purely liquid or semisolid. But as she advances from week four, it is safe to transform her food to solid with assistance.

The ideal time to adopt a Maltese puppy is during the socialization period. This is when the pup is 7 to 8 weeks old. Her weight has increased to 15 ounces and could be up to 25 ounces.

These untrained pups should start their coaching when they get a new home.

Since the puppies are still in their developmental period, any exposure to harmful and traumatic situations could also affect their behavior as an adult. Between 8-11 weeks, this period is known as “fear impact.”

Well, gentle training with a lot of positivity is an excellent way to start training your fur babies.

The growth and development of a Maltese puppy are pretty similar to that of human toddlers. At around 3 months of age, the puppies weigh around 2 pounds.

Around this time, the pups start teething. Similar to babies, your pet will chew anything on hr reach. So it is necessary to be careful during this time.

As the pups reach six months, their adult coat is wholly developed.

Additionally, Maltese reaches the adult height of 8-10 inches and weighs around 4-7 pounds.

Unlike human toddlers, Maltese becomes sexually active when they are 6 months old. So the toddler period is about the right time to spay and neuter your puppy

As the name suggests, the adolescent period is a trying time for Maltese owners. Like human teenagers, the puppies enter their adolescence after 6 months.

The pet during this period is energetic and will test their boundaries. The moment where the puppies seem to forget their training arrives. To be in control, the owners should be able to establish themselves as the leader, so the pups follow you.

At 1 year old, your Maltese is a fully developed dog. However, puppy characteristics will likely remain for a year or two.