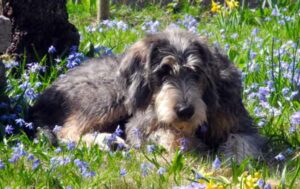 Griffon Nivernais is a dog breed originating from France that was bred as a scent hound. They are also friendly hunting dogs making up as a friendly companion among the families. These dogs are best suited for the rural area and are not so preferable in the city. They are very playful dogs needing a yard space to run and play.

These dog breeds are capable of tracking down from small to large scale as they have a very sensitive smelling capability. They are one of the smartest dogs and are very playful in nature.

Later, they were again revived through breeds like Grand Griffon Vendeen, Otterhounds and Foxhounds.

Griffon Navernais has a rough-looking coat with shaggy furs. They have thick-coated and long fur. They have bushy eyebrows making them look very cute and pitiful with all the love in their eyes.

They come in different colours mostly in the shades of grey with a mixture of fawn colour around their legs or head. With the shaggy coat, Griffon Navernais has a dishevelled appearance and usually seems like they never had a bath.

Griffon Nivernais being a hunting dog and mostly with aggression towards its prey is completely different when they are with their companions and families. They are very playful and cheerful dog breeds. They are well known and praised for their hunting skills and scenting abilities.

They are often in a pack which makes them have friendly relationships with other dogs and be tolerant towards them. But it may not be the same with all of them depending upon the environment they were raised in.

They are very active in nature and can go on performing duties, doing exercises for a very long period of time. They are very devoted and loyal and devoted towards their masters.

They may pick up some bad habits like being overly active with activities such ad aggressive digging, never-ending long barkings, scratching, chewing things if they are not exposed to mental and physical simulations on the daily basis.

Griffon Navernais has an independent and stubborn side which is often a difficult thing to tackle when training them. They should be trained to walk on trails and on their scenting ability. The hound trainers are suitable trainers to train this breed of dogs.

They should be having continuous training sessions as they can be shown very destructive behaviours when they are bored and are left with no activities to do. They don’t like being trained to follow every command their masters give them rather they are free-willed and like to do activities of their own.

Saying so doesn’t mean they completely ignore their masters rather are supportive and give much respect to them.

Griffon Nivernais already looks dishevelled and dirty due to their shaggy coats of hair. They require weekly brushing to make their coat clean and make them look tidy. They should be brushed with a hard bristle brush and metal comb.

Due to their droopy ears, they need weekly cleaning to be safe from the common bacteria causing ear infections (Otitis Externa). They should be bathed only two to three times a year with a mild or medicated shampoo to keep them clean.

Griffon Nivernais is one of the healthy dogs with great health conditions. But can be prone to diseases like:

This type of infection is common among this breed of dogs as they have droopy and long ears and also them being a hunting dogs. When the canine suffers from an ear infection it is likely to scratch its ears from time to time giving off a bad smell and redness in the ears.

To avoid this kind of ear infection their ears should be cleaned in a timely and medicated ear drops should be used.

Hip Dysplasia is a common orthopaedic condition found among hunting dogs. Hip Dysplasia is a condition occurred when the ball of the femur isn’t fully covered by the socket. When a dog suffers from hip dysplasia they show unusual legs behaviour mainly on their hind limbs and have uncomfortable walking.

Progressive Retinal Atrophy is a condition where there is loss of vision and night blindness. The condition may start with light blindness completely leading it towards full blindness. It is a disease with no cure to date.

Griffon Nivernais is a medium-sized dog, very active and energetic they should be fed high-quality food with high protein and low fat. They should maintain lean muscle mass so as to move and use their body to the fullest while hunting.

They can be kept healthy and their health can be maintained through an active breed or working breed formula. It should be remembered that they should not be overfed which might result in obesity.

Pros Of Having A Griffon Nivernais

Cons Of Having A Griffon Nivernais