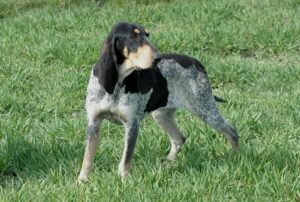 The Petit Bleu De Gascogne is among the scenthound type that originated as a hunting dog for smaller games. They were bred to hunt small animals like a hare and a rabbit rather than wild boar or deer. These breeds have great scent ability and utilize it till miles. In addition, they are used in the pack to hunt instead of working alone.

The Petit Bleu De Gascogne were bred as French hunters who wanted small hunting dogs to pursue smaller games. Around the 1500s, this breed was created by searching the smallest Grand Bleu de Gasc and breeding the same kind accordingly. After some generation, they rose to popularity within rabbit hunters. However, they weren’t as economical as their larger relative so their popularity was limited at that time.

Even after two world wars and French Revolution, they survived because of their rabbit hunting ability. In the late 1700s, they made it to the USA where they saw a significant rise in their numbers. After that, their demand increased outside their home country outranking Grand Bleu de Gasc. As for now, these breeds are more popular in France and are known as rare breeds outside that region.

Talking about Petit Bleu De Gascogne, they are calm, obedient, friendly, loyal, and affectionate. They always show their true feeling to anyone without being shy or aggressive. These breeds are well-temperaments that do well in field and house as well. Therefore, they have transitioned from hunting dogs to home dog well-being companions of many families.

As a scenthound, they must be engaged in different tasks otherwise they tend to search for their own task and can be destructive. At home, they are a relaxed breed that loves to be around their loved ones and kinda seek attention and affection from them.

So, as a result, they can suffer from separation anxiety, frustration, and loneliness if they don’t get care or attention from their beloved. As a friendly breed, they don’t mind being with strangers so, that doesn’t make good watchdogs at home. However, they have intimating bark if they sense any danger.

The Petit Bleu De Gascogne is a highly intelligent breed but it can be a little challenging to train. They are strong-willed and need an experienced trainer. In addition, the owner must be firm and consistent while training using positive reinforcement to keep them in your side.

Like Grand Bleu De Gascogne, the smaller one is not fast hunters but are very determined and motivated. They soak up commands and tasks easily so, start early training as well as socialization to avoid bad behaviors while growing. Engage them in scent-based training and games for their mental and physical enhancement. With proper training, they do well during walks and runs with family members.

With children, the Petit Bleu De Gascogne is friendly and patient and loves to play and be around them. However, they should be properly trained and socialized to avoid further issues. In addition, they must be supervised during playtime and teach them how to behave or act around kids.

Likewise, educate your kids as well so they don’t make them aggressive. While playing kids might pull their ears or tail which can make them violent.

Hip and Elbow Dysplasia: This issue is mostly caused due to heredity where the joints are not built properly. As they grow, the hip and elbow joints began to wear down that leading to pain and dysfunction. You can see symptoms like difficulty during their walk, run, and doing the bunny hop. If any symptoms are seen taking them to the vet for a proper checkup before its too late.

Ear Infection: Dogs with long ears are most likely to have an ear infection. As the Petit Bleu De Gascogne loves to be outdoor often they develop ear infections easily. Also, they can get ear infections from wet ears from swimming so make sure you dry them. Symptoms like ear scratching, shaking, and whining can be seen during ear infections.