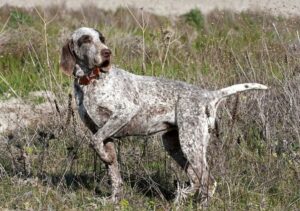 Spanish Pointer is a medium-sized breed also known by other names as Burgos Pointer, Burgalese Pointer, and Perdiguero de Burgos in Spain. They were bred for hunting where they assist the hunter to hunt small birds and animals. As for now, they make good family dogs and a great companion for active people.

They have short smooth coats that tend to be littler bushy. They have two colors which have a brown coating with white spot and another with brown with darker brown staining. The new breeds are taller than the Old Spanish Pointer and are popular for hunting.

The origin of these breeds is said to be from the 1500s in Spain. They are a mix of the Pachon Navarra and the Sabueso Espanol originated for hunting. In addition, they are used to develop another large pointer breed. It is said these breeds’ ancestors are Old Spanish Pointer that was first noticed by a Roman writer in the first century.

Later after several centuries, Muslim Conquerors found their existence very useful. As for now, the Old Spanish Pointer became extinct in the 20th century after the Spanish civil war. However, the now Spanish Pointer still exists and is now is the companion of several owners.

Temperament: Their temperament is usually gentle, calm, and quiet. As a hunting dogs, they point to the target instead of barking that makes their owner’s job easier. They stay quiet until they need to or see some stranger or intruder approach. Additionally, Spanish Pointer needs large homes or space for training and physical activities.

Behavior: They are an active breed that needs enough exercise daily. Also, this breed must have enough playtime and socialization to develop good behavior. Some people think hunting dog has aggressive behavior but it’s not the same case for them as they are easy to handle. If proper guidance is given they do well indoors however, a large space is always better.

Personality: Spanish Pointer is intelligent, hard-working, and affectionate that do well with the family. They are good companions and takes good care of their loved ones. They have protective nature against their family and other pet in the house.

The Spanish Pointer requires an experienced master for their training which won’t be difficult for both pet and owner. They are curious and eager to please their master so they put in extra effort during training sessions. Likewise, they soak up the tips and tricks easily so, training won’t be hard with them. Always remember to use positive reinforcement during training and end the session by praising them.

Spanish Pointer is calm, quiet, and patience breed that get along with children as well as other animal. However, they should be properly socialized before letting them play together. Always supervise them during playtime especially around toddler. Toddlers tend to be mischief with them that causes accidents while your dog can show aggressive behavior towards kids. Socialize your child alongside your pet on how to take care of them so they don’t harm them unintentionally.

Cherry Eye: This is one of the common health issue seen in dogs as it take place after a tear gland. It inflamed the third eyelid which hopefully isn’t painful. However, it can cause itchy eyes that makes worse if your dog continuously rubs it. Visit your vet for a proper consultant before using any product in the eyes.

Hip Dysplasia: It is cause when the hip bone of your dog is displaced from its original place. This issue is very painful as it makes them difficult to walk or even move. You might not see it but can consider some symptoms as your dog limping while walking, unequal leg length, and so on.

Weight: The average weight of Spanish Pointers is between 55 and 66 lbs.