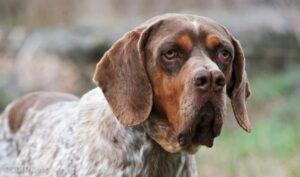 Pachon Navarro is a medium-sized Spanish dog, bred as a hunting dog and tracks birds with its master. They are a family dog that loves to be around their loved ones and are suitable for active owners. In addition, these breeds are strong, loyal, and intelligent while having smooth, short, and curled coats.

Being an active breed, Pachon Navarro needs daily exercise and training to stimulate their physical activities. Therefore, they seek an experienced owner who is bold enough to handle them. They need a wide area to roam and play freely hence, the apartment is not suitable for them.

The Pachón is one of the oldest pointer dogs, bred in the middle age of Europe. During this time the hunting occupation was famous and Pancho was utilized in Spain under different names. Then around the 1970s, it became extinct. After several years of effort, Pachón became a survival example in 1979.

Later in 1800, the Pachon’s number grew and also was recognized by breed standards. However, in the 1950s, they face a virus named myxomatosis that eradicated the Pachon breed. Hopefully, some were saved from being extinct as they were found in remote areas. In 2010, the Spanish government recognized this breed and was on the list of dog breeds.

Temperament: Pachon Navarro is a very kind, loving, and gentle breed that is loyal to its master. They are active and need a lot of places to play around so, these breeds are not suitable for apartment living. Pachon is a hunting breed that stays very focused and patient in hunting small game animals and birds.

Behavior: They are active breeds that need daily exercise and need to do something all the time. Enhance their physical as well as mental activities regularly. Not enough care can make them destructive and mischief. In addition, they are strong and independent hence, early training is very important from an early age so they behave correctly while growing up.

Personality: The Spanish dog is playful and loves its master as well as family members. They are eager for every fun activity led by their master. For instance, good at fetching, playing tug of war, and other games. Likewise, Pachon is fond of love so, don’t leave them alone for too long as they will sulk be depressed. Always remember they are protective of their master and will defend you in any situation.

Pachon Navarro is family-oriented and is very eager to please their owner hence, they are a quick learner that makes training sessions easier as well as fun. However, it might be a little challenging for first-time owners as they show different personality traits in adulthood. Be patient and consistent while training them as it enhances their mental and physical health.

Pachon Navarro is a friendly dog that plays along with kids and other dogs if socialized properly. These breeds love to be around children as they are kind and gentle with them. But remember to properly train them as well as kids to behave around each other and always supervise them while playing. Sometimes they can’t tolerate the harsh behavior of kids so they tend to get aggressive during their interaction.

Pachon Navarro is a healthy dog breed with proper care and a balanced diet. However, they still face many genetic health issues.

The Pachon Navarro comes in the following colors:

Height: The average height of Pachon Navarro is 18-23 inches.

Weight: The average weight of female Pachon Navarro is between 44-66 lbs and female is around 55-75 lbs.