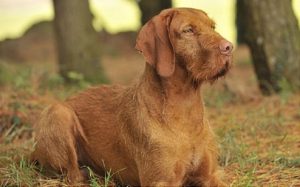 The Wirehaired Vizsla is a medium-sized, versatile hunting dog which is an active, gentle, and calm companion that do great as a family companion. They do not do well in an apartment as they require a high level of activity. So, a house with a well-fenced yard is suitable for them. The owner should be an active human being who enjoys jogging and running.

The Wirehaired Vizsla is very much similar to its close cousin Vizsla. It has a graceful movement that is important while it is on for hunting. The head is strong and well-proportion with the body. The ears are slightly long that hangs close to the cheek.

The wire coat makes this breed different from many other breeds. They have a bushy eyebrow that enhances their expression and a harsh beard which is 1 inch in length.

The origin of the Wirehaired Vizsla was in Hungary developed in the 19th century. They were developed by crossing Vizslas and German Wirehaired Pointer by the breeder named Vasas Jozsef. The goal was to achieve a heavier and sturdier build with a thick coat that can protect them from extreme cold weather. They were used for hunting.

Is the Wirehaired Vizsla Child-Friendly?

The Wirehaired Vizsla does well with children of all age. As an active hunting dog, it makes a great playmate for kids. However, its energy can be too much for small kids. Therefore, proper supervision is necessary while letting them play with your children.

Also, teach your kids to approach dogs and be gentle with them.

Temperament: The Wirehaired Vizsla has a gentle and friendly temperament. They adore their people and are very loyal to them. Its easy-going temperament makes him an excellent companion for a family However, he is more attached to one single person and sees him/her as its leader.

Behavior: The Wirehaired Vizsla is a calm dog that does not bark unnecessarily. If they see any unusual activity in the surrounding, they will bark to warn their owner. Therefore, they make excellent watchdogs.

Personality: The Wirehaired Vizsla has an outgoing personality. They are good with other pets if raised together from an early age. They tend to be suspicious of strangers but if introduced properly, they can be welcoming of them.

The Wirehaired Vizsla is a very clever and smart dog that is very much willing to learn new tricks and commands. Therefore, they are easy to train but first, you must establish firm and consistent leadership upon them. As to encourage them more in learning, reward them with treats and lots of vocal praises.

Do not use force hand or harsh word, as it will only scare them and they may not be able to focus on the training.

The Wirehaired Vizsla is generally a healthy breed with a life span of 12-14 years. During these years, they can get the following possible health problems:

The Wirehaired Vizsla comes in the following colors and markings according to the American Kennel Club:

Height and Size: The average height of the Wirehaired Vizsla is between 21-25 inches and the average weight is between 45-65 pounds.

Cost: The average cost of the Wirehaired Vizsla puppy is between $600-$800 USD.