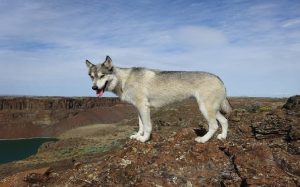 The Wolamute is the blend of the two handsome breeds: Alaskan Malamute and the Grey Wolf. It is a hybrid dog that has pointy, alert ears, thick coat and has a large body. It was originated in the United States and is also popularly known as Malawolf.

Wolamute has a wolf-like coat and their body is muscular and strong. It inherits the characteristics and behavior of its parents. As a large-sized and an active dog breed, It is not suitable for apartment life and for a novice dog owner. So it is best to keep your Wolamute in a house with a big yard.

Temperament: The temperament of the Wolamute depends on the character it obtains from either of the parents and also in the environment it has been raised in. It is a very active dog that needs vigorous exercise to keep themselves fit and contained.

Behavior: Wolamute has a high prey drive, so it is better not to keep small pets in the house as they will start chasing them around. They need a good amount of exercise and if they do not get the required physical activity, they will get destructive. So take them for a hike, long walk or run regularly.

Personality: The personality of the Wolamute is calm, affectionate and sweet. Despite their size, they are very loving and affectionate towards their people. They are suspicious of strangers and if someone is in their territory, they will bark and warn their owner. A proper introduction is necessary when some visitors come in the house.

Wolamute does well with family children but with stranger children, they can be dangerous. They have a high prey drive due to which they might start chasing small kids around. So while letting them play or interact with kids, they should always be supervised. Also, kids should be taught to behave with dogs and be gentle with them.

Reward them with treats and vocal praises to motivate them. Do not be harsh on them, otherwise, they can be aggressive and might even bite you.

Wolamute can obtain some of the genetic health problem from its parents.

The Wolamute comes in the combination of following colors

Height: The average height of the Wolamute is between 27-30 inches.

Weight: The average weight of the Wolamute is between 115-175 pounds.