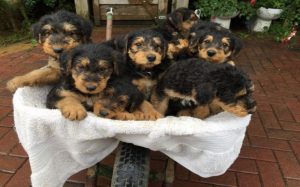 Newborn puppies of Airedale Terriers vary on size and growth depending on the breed. Airedale Puppies go through a lot of behavior changes after coming to life. You should observe closely week by week to know the changes in your puppy.

Here are are some inside information about the transformation of the Airedale Terrier Puppies Week by Week.

At birth, the Airedale puppies are blind, deaf and toothless. They are also unable to regulate temperature and are dependent upon their mother and litter mates.

The first two weeks the Airedale puppy will sleep 90 percent of the time. It is also the full development stage of the puppy.

The second week of the life brings a lot of changes in the Airedale Terier puppies. The sealed ears and eyes will start opening between 10 to 16 days. They generally stand within 15 days and take their first walk by 21 days.

This is the important time to introduce your pup to other people and animals. By three to five weeks, they become aware about the people and the surrounding. And from four to twelve weeks they need more of the human interactions as they develop curiosity and social skills.

When the Airedale puppy reaches the age of nine weeks, it is the right time to send them to elementary training classes.

This stage of their life is most influenced by their playmates. It is also known as the “elementary school age”. Your new Airedale puppy will start understanding between submission and dominance. Teething and chewing and the full teeth grown until 6 months.

The Airedale puppies are big enough to understand that they are the part of the pack including both human and canine. Their behavior will be mostly influenced by the group. You will find your pup challenging you as they will have the dominant attitude. The puppy will experience the beginnings of sexual behavior.

As now you know all about the behavior development about the Airedale Terrier, prepare yourself to deal with the specific behaviors so that it will be easy for you to handle your new pup.