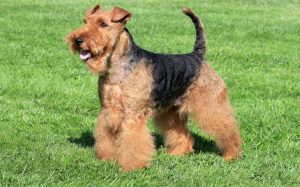 The Airedale Terrier dog breed is the largest breed among the terrier breeds of dogs that originated in the valley of the River Aire, in the west riding of Yorkshire, England.

The Airedale Terrier breed is also called Bingley Terrier and Waterside Terrier and traditionally, it is named as the “King of Terriers” as it is the largest of the breeds.

The breed of Airedale Terrier is believed to be originated in the Aire river valley of England in the 19th century.

According to Hk Airedales, these dogs were used by the working class Yorkshiremen of England for hunting down the large rats that occupied the banks of the Aire River and streams.

The Terriers swam from side to side when necessary and
searched the stream banks for rat holes under the intense direction of their owners (Edwards 1982, Dutcher and Framke 1990).

The dogs selected “active” holes upon which a ferret was inserted to drive out the unhappy rodents causing trouble in irrigation. Once taken out, the rat typically bolted into the water with the dogs in quick pursuit.

The dog that selected the burrow was given two points while the dog that killed the rat gained one point (Cummins 1994).  These competitions continued until the 1950s using Airedales.

Are the dog’s child-friendly?

The Airedale Terrier breed dog is very good with children and can also be reliable babysitters.

However, it is not a wise choice to leave the children and the airedale dog unsupervised. If the dog is not used to the children, he can be a threat to child’s condition.

The Airedale is a hard-working breed and is prone to behaviors that come naturally to terrier breeds like digging, chasing and barking. Owners unfamiliar with the Airedale personality can find this breed frustrating.

Airedale Terriers are hard-working as well as hard-playing dogs with a limitless amount of energy. They are vigilant and protective, which makes them excellent watchdogs, though they are friendly to family and friends.

The Airedale is a true family dog and loves attention from all people, it will enjoy running and playing with children at day, and curling up for a belly rub at night by its owners.

So far this breed has a very bold, aggressive and strong temperament.

The Airedale Terrier breed dogs are intelligent dogs that learn things quickly but also are independent and hence don’t like being told what to do.

It is better if the training sessions of Airedale Terrier are very short and quick. They are bold and aggressive breed and are difficult to train.

Here are some facts about the Airedale Terrier breed that every dog owner should know.

The average lifespan of Airedale Terrier is 10 to 13 years old and during their lifetime, they face a lot of health issues.

Sometimes they suffer from the colonic disease. Other serious health issues that this breed is very prone to are canine hip dysplasia (CHD), gastric torsion, and hypothyroidism.

It is very usual that almost every Airedale terrier dogs are black and tan in color.They have furs with dark grizzle saddle ( black mixed with gray and white) colors.

The price of the puppies of Airedale Terrier depends and varies on how well the breed is. A breed puppy of Airedale costs around $700-$800 USD approximately.

The Airedale Terrier dogs have many similar breeds. Some of them are listed below: