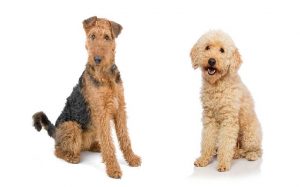 It is medium-sized with a high activity level that best suits an active family or a single person. They do well in an apartment too as long as they get to take a regular walk or play in the park.

The Airedoodle appearance is a mixed one where it inherits most from the dominant parent. The face is usually round in shape and sometimes comes with a long muzzle like Airedale Terrier. The body is strong with a dense fur that is sometimes soft and sometimes coarse.

Temperament: The temperament of the Airedoodle is easy-going, intelligent, and active. They are friendly with family as well as strangers if nothing is suspicious about them. They are also a very alert dog that will sound an alarm if they see unusual activity around.

Behavior: Airedoodles are very fond of their family so they do not accept loneliness. If they are left alone all by themselves, they will start destructive behavior like chewing on stuff, biting, barking.

So it is necessary to keep a company, even other house pet for them while leaving a house for a long time.

Personality: Airedoodle is a highly energetic dog and also intelligent. They catch on commands and instruction quickly which makes training them easy. Involve them in regular exercise to keep them fit and healthy physically and mentally.

Yes, Airedoodle is a child-friendly dog which is loving towards kids and adores them. Since they are an active breed, they are very playful with children making a great play partner for them.

Although they are a friendly and playful dog, their togetherness should always be supervised so that small children do not play rough and hurt them.

Training Airedoodle can be quite hard due to stubbornness but with early training, it can be made obedient. They tend to respond well to positive methods of training.

So, reward them with delicious treats and vocal praises. This will keep them motivated and encouraged them to be focused on the training. Once basic training is completed, enroll them in agility.

The Airedoodle is a designer breed, so it can face the genetic health issues.

The Airedoodle comes in the following color combination of the Airedale Terrier and Poodle:

Cost: The average cost of the Airedoodle puppy is between $500-$600 USD

Height: The average height of the Airedoodle is between 22-27 inches.

Weight: The average weight of the Airedoodle is between 40-65 pounds.