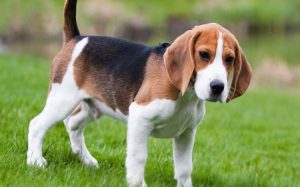 American Foxhound is a hound that was used for hunting foxes and small games in a pack. It is not a dog for anyone as it is a hunting dog that anyone cannot raise. They need an experienced owner who is interested in hunting.

The American Foxhound gives birth to 5-7 puppies at a time. Puppies need good care and nursing from the time they are born. So, here are the behavior and physical changes that you find in the American Foxhound during different stages of their puppyhood.

The newborn American Foxhound is fully dependant on its mother as they are unable to see, walk, hear or even defecate on their own as soon as they are born. They are cute little puppies with a black and white or tan coat when they are born. Since they are unable to see or hear anything for around 2 weeks, they completely rely on their sense of smell to find their mother for food and warmth.

The stage between newborn to two weeks is a neonatal stage. This is the most vulnerable period in the life of the American Foxhound puppy. The mother takes care of everything from cleaning to making them defecate. She gently licks the belly of her puppy which gives stimulation and makes them defecate.

For two weeks the puppies only sleep and eat. They need about 90% of sleep for their physical as well as mental development. The only food they need is their mother’s milk as it contains antibodies that protect the puppies from possible diseases. They should not be given any solid food except the mother’s milk.

It is one of the important periods in the puppy’s life. They start to see vividly, here their mother and other things in the surrounding. They begin to get familiar with the canine world. Their weight ad height doubled in the second week and they start to take their first wobbly steps. At around the fourth week, the puppies sample the solid food from their mother which is the first step towards other food rather than milk.

In this stage, the American Foxhound puppies are old enough to get to know the outside world. Slowly expose them to the outside world and guide them as they are in the stage where they see anyone as their family members. Take them to a park but on a leash so they do not run around. Carefully expose them to a variety of people as well as other canines, so they get along with other dogs and pets too.

The stage where the American Foxhound puppies experienced their first heat an are sexually matured, it is called the juvenile stage. They need basic obedience training which should be done by using positive reinforcement. Give them a reward-based training as they tend to respond well to treats and praises from their master.

The American Foxhound puppy is a grown dog at this stage. Although they are physically and sexually mature at this age, they still behave like a puppy. They need another year to be fully matured and behave like an adult dog. They need good exercise and physical activities to keep themselves healthy and happy. A complete balanced diet should be provided with the required supplements.