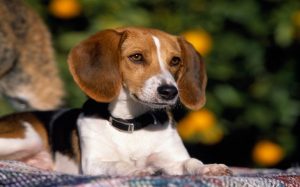 The American Foxhounds have large and soft eyes that described as gentle and pleading. Lack of exercise can lead to depressed and destructive Foxhound.

When To Start Training?

The Formal training of an American Foxhound puppy is traditionally being delayed until they cross 6 months of their age. But this time is very poor to start their training.

Your puppy learns every day from everyday experience and delaying training means you missed the opportunities for the dog to learn, how you would like him to behave.

If you want an obedient American Foxhound in the future you need to start training them as soon as the puppy arrives home, first you need to teach them simple obedience commands, such as “come”, “go”, “sit” etc, and than you can start by giving them small tasks.

Where To Start The Training?

American Foxhound’s puppies tend to be scared with new people so your home is the best place to train them, this is the place where they feel comfortable and safe.

When they reach their right age of training, you can send them to dog kinder gardens, where they can get new friends and can socialize easily.

How To Define Task For Your American Foxhound?

Although American Foxhound quick learners they have a weak point and that is that you can’t take their attention for a long time. So you need to keep their training session short and should not repeat any task.

Motivate your American Foxhound pup by using powerful rewards that can be easily and rapidly delivered.

There are several training process that you can use for your American foxhound such as:

This is a modern technique to train your dog. It is a very popular term inserted in many dogs training. Science-based technique should represent the best dog training approach to help your American Foxhound become the pet of your dreams.

In this technique the dog learns by the consequences his own behavior and every thing they experience in their life.

Clicker training is a method that tells your dog if he is correct, instead of only pointing out what is incorrect.

This training is done by simple device called Clicker, when pressed makes a distinct, consistent sound, or a short word such as “yes,” “good,” or “smart.”

Positive reinforcement is a very effective way to train your American Foxhound. In this process, you need to immediately add something after a behavior occurs that makes the frequency of the behavior go up.

For example, you ask your dog to sit, the dog sits, and you give him a treat (something is added). The dog is more likely to sit next time you ask (the behavior was reinforced).

Strategies and Techniques For Easy Training

In this technique, you need to start by working with your American Foxhound on favorite or familiar behaviors. Create a positive reinforce by rewarding when following your instruction.

And once your dog understands that, take small steps: Change only one variable at a time and once your dog has mastered sit example, add a slight distraction, like television. Take your time training becomes too hard, your dog is likely to give up.

Three ways to make a routine for your dog:

Generally, American Foxhounds love a good run or jog, so it is much keep him focused around distractions if we move past them together quickly. Once you can keep your American Foxhound’s focus at a fast pace (a run then you can try the same behavior at a jogging pace.