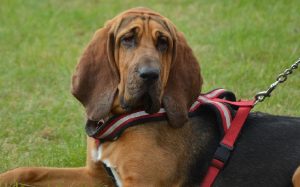 The Bloodhound which is known for its excellent sense of smell is a group of scent hound. They were bred to follow a cold and old scent and lead the hunters to the spot of the prey.

Bloodhound is known for its remarkable nose that could even track the faintest scent. Their tracking ability is so amazing that even the evidence located by them is acceptable by many courts of law.

The Bloodhound is a large dog with a wrinkled face. Their lip is so loose that their jowls are hanging due to which they tend to drool a lot. The sunken eyes, wrinkled face, and a long droopy ear give him a sad, lazy expression. The average height of a Bloodhound is 23-27 inches and the average weight is between 80-110 pounds.

They have a thin coat that is loose and droopy. The coats around the neck and head hang in the fold. Although their appearance is not cute or handsome, they can make an excellent family pet if goes on the right owner.

Bloodhound is of curious temperament. Any interesting scent can distract him from whatever he is doing and he will go off tracking the thing. Therefore, they should be kept in a well-fenced place and let them roam around tracking a small game. They are affectionate and loving towards their family and want to cuddle with them at the end of the day after doing some tracking work.

Bloodhound is a great tracker but they are not a good watchdog or a guard dog. If they are not off trailing, they are probably lazing around or sleeping next to their owner.

Bloodhounds are happy to sleep all day long without any activity to do, but they need to do a lot of exercises. So, instead of letting him laze around, take him for a walk, hiking or give him some scent so that he go trailing. The area should be well-fenced as Bloodhound may get some interesting scent and he might wander off tracking the thing. Once they are off tracking the scent, it will be hard to get them back home.

If you are keeping a Bloodhound in an apartment, make sure to take him out for a walk regularly. This will keep both their body fit and mind stimulated.

Bloodhound, while growing up tends to chew, bark and jump at people a lot. Training them properly can reduce this kind of behavior to some extent.

Bloodhounds are famous for baying. They love to be around people and if they are left alone they will bay, and disturb the whole neighborhood, especially at night. Therefore, they should not be left outside alone. Bloodhound may develop separation anxiety if left alone for a long time. They will show destructive behavior like chewing anything they find.

Bloodhound has a docile and lovable personality. They have this manipulative face with droopy eyes that anyone will fall for. They are gentle, friendly and affectionate towards his people. Bloodhound is not usually an aggressive dog but they might show aggression and fight with a same-sex dog. So, introduce them to some pet dogs sometimes as to make them friendly with other pets too.

Bloodhound is an independent and stubborn dog. They do not listen to anyone and do things as they like. However, establishing a firm leadership with consistent and confidence is key to train him. Bloodhounds are smart and quick learner, so keep their training session short and fun which includes treats, vocal praises and gentle pat on back.

Bloodhound is very affectionate and caring for children. They also make a great playmate with children. But as they are big, they might accidentally knock over children and injure them. Therefore, supervision is necessary to avoid any kind of harm towards your kid.

What Can Make Bloodhound Aggressive?

Bloodhound is not an aggressive dog. However, rough handling can make them aggressive. They also show aggression if they see same-sex dog near them. Therefore, a proper introduction and supervision is necessary if there is another pet.

How Does Bloodhound Behave Around Strangers?

Bloodhound is one of the shiest dogs and can be reserved and shy around strangers. They should be exposed to a variety of people at an early age so that they can overcome their shyness when in an adult. Introduce them properly with guests and visitors.