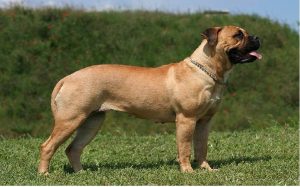 The Bullmastiff is not too active, but he has obedience, agility, tracking, and carting, and he makes a good therapy dog. He is an intelligent, quick and study but he is not big on repetitive training.

The Bullmastiff does not love other dogs, especially if they are of the same sex. It’s difficult to house a male Bullmastiff and another male dog of any breed together. Even dogs that live in peace for years can one day become implacable enemies. Bullmastiffs also have a high prey drive and many bullmastiffs cannot live with cats for those reasons.

The Bullmastiff  breed was recognised in the mid 19th century, by English gamekeepers who needed a large, quiet, fearless dog with large speed to hold poachers

Poaching eventually declined and Bullmastiff took on a new role as a guard dog. As a result of the mastiff influence, fawn coat with the black mask can become more common as well.

In 1924 England kennel club recognized the breed and the American kennel club followed the suit in 1933. The first Bullmastiff was recognised by the AKC in 1934.

Yes, Bullmastiffs are child-friendly because they are patient and protective with children. But,they are large and can accidently knock over or step on a toddler. If you have a children, take their age and size into consideration when deciding whether to buy a Bullmastiff dog.

As with every breed, teach children how to approach and touch Bullmastiffs and always supervise any interactions between the dogs and children to prevent any biting or ear pulling or tail pulling. Teach your child never to approach any dog while he is eating or sleeping.

Behavior: The intelligent Bullmastiff dog is a terrific family dog. His behavior is loyal, loving, good natured and sweet, although he can be aggressive when he feels that he or his family is threatened.

Temperament: The temperament is affected by the number of factors including heredity and training Puppies with good temperaments are curious and playful. They approach people and be held by them.

When Bullmastiff is trained, he is calm and dependable and set boundaries when he is young and give him consistent training. A Bullmastiff raised in this way is docile and easygoing and will accept the strangers. But he is aggressive with other dogs.

Bullmastiffs need training at small age and that is throughout their life. It is said that early training and socialization with stargers help curb unwanted aggression.

Bullmastiff dogs are very smart and easy to train. Puppy classes are required for general socialization and training. They love training and learning and both make for a better companion and build a good relationship with the owner and family.

Bullmastiff on positive teaching methods. They excel in obedience and herding even barn hunt and lure coursing and owners will discover something fun to do with their dogs. They may be stubborn but are trainable.

There are many circumstances where over-training your Bullmastiff dog can be harmful and even undo all the hard work you and your puppy have put in. Positive reward based training is important for your dogs.

Some of the facts related with Bullmastiff dogs are as follows:

Bullmastiffs are healthy but like other breeds, they are prone to certain health issues. Some of the health problems are given below:

Which breed are they similar to?

Some of the breeds similar to Bullmastiff dogs are as follows: